Jeff Nugent, Bud Deihl and I were having coffee yesterday and an amazing conversation developed. We were reflecting on our own journey of discovery about the Web 2.0 world. In the past year, we have all started social networking (meeting some wonderful colleagues at College 2.0). This led to social bookmarking and international sharing of ideas. Throw in RSS feeds, which we all now use. Then, since the first of the year, all three of us have begun seriously blogging. The time investment has more than been compensated by the richness of ideas that have developed. We now recognize that – through our social networks and blogs, our “local” conversations have expanded to at least four continents.

Our “day-job” remains faculty development here at VCU. What we are beginning to recognize is that we three have made some fundamental paradigm shifts…and therefore no longer see the world in the same way as the faculty we assist. They come to us for help with discrete tools, whereas we now see many of these tools as interconnected and part of our culture.

Badge, Cann, and Scott published an article in 2005 regarding e-Learning versus e-Teaching. The article describes how most Virtual Learning Environments are designed to be simple to use by staff and students alike. This has led to academic staff rejecting formal centralised training and instead attempting to teach themselves how to use the system. What they found was that this resulted in widespread use of the system but with poor pedagogic development, leading primarily to an electronic document repository rather than an online learning tool which made full use of the potential of the full suite of available tools. While this article described a British institution, the same principles appear to play out here. There data showed how Blackboard was used at their institution: 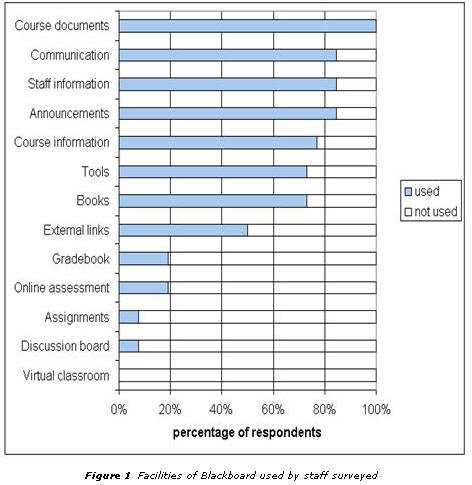 At ELI this January, Jeff heard faculty say they were tired of being “workshopped.” Yet the data above suggests that not attending centralized training leads to poor adoption of technology. I know that we are not the only institution facing this challenge. In reflecting on our own journey versus our clientele’s, we realize that they do not see the implications on NOT using Web 2.0…because they do not yet speak the language.

One of my favorite TED Talks is Malcolm Gladwell talking about what we can learn from spaghetti sauce. He described a food industry consultant who uncovered a key secret to what eaters like. Running huge focus groups to find customers’ truest tastes, Gladwell’s hero drew a radical conclusion, an epiphany that has defined food marketing ever since. When people were asked to describe the perfect spaghetti sauce, they typically talked about runny sauces. But when taste tests were conducted, they overwhelmingly chose “thick and chunky.” At the time, thick and chunky did not exist. This consultant found that people did not know to ask for thick and chunky…but it is what they wanted. He convinced Prego to not come out with one best spaghetti sauce but dozens…and the food industry was totally changed.

The Web 2.0 world is the “thick and chunky” side of web applications of which most faculty are oblivious.

Two years ago, I was stunned when an 18-year-old girl in a focus group I was running equated “internet” and “oxygen” as co-equals – both necessary for life. I did not understand her then. I think I do now…and that realization is a bit scary. Jeff, Bud and I basically have moved beyond Prensky’s notion of a digital native because we embody his concept without fitting his model. We now speak with that digital accent he alluded to…which is making conversation with our chief clientele more difficult. Our interconnected use of Web 2.0 applications has become like the very air we breathe, unconscious but necessary. We no longer think about using technology in teaching – that has become a given. Now we focus on the rich variety of choices – trying to find the variety of “sauces” that will enrich our instruction.

Our challenge … helping our colleagues see the thick and chunky applications they (and their students) are currently missing. I would be interested in your thoughts on how you are solving this at your institutions.