Those who follow my blog know that I have used Many Eyes and TagCrowd to develop wordcloud visualizations of data in the past. John Krutsch has taken this concept in a natural direction and mashed up one’s Twitter feed with a tag cloud generator. Below is my Tweet Cloud: 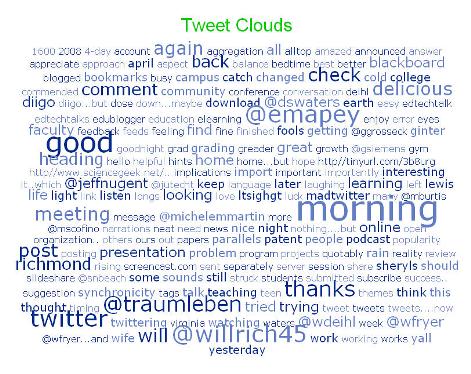 Tweet clouds have been getting a lot of buzz in Twitter this past week. Alan Levine wrote a nice posting on how he initially had trouble with Tweet Cloud, twittered about it, and John immediately fixed it. As John noted in his comment to Alan’s post:

“For me this is one of the major benefits of using twitter as part of my PLE even if you do not directly ask for help often times help comes anyway. Twitter is just a big Karma Dealer, if you are open, sharing , and caring, it will come around and pay good dividends.”

Open, sharing and caring….a nice description of the evolving wired world (or at least the direction in which we should try and take it).