We have completed two days of our TLwT Institute and are having a ball! Over the five days, we take a cohort of 18 diverse faculty from multiple disciplines on a journey of Web 2.0 exploration. During the first two days, my colleagues Jeff Nugent, Bud Deihl and I have worked with this cohort to define instructional applications for Web 2.0 sites, analyze the syntax of the web in developing search strategies, establish social bookmarking accounts, put RSS feeds to work towards building personal learning environments, and explore ways of connecting and collaborating through Google Docs, Wimba Voice tools, and wikis. I was reminded of the classic Farside cartoon yesterday afternoon when one said her brain was full!

I need some time to reflect on some of our interactions and know that Jeff and Bud will also want to post their perspectives. Jeff’s call on who gets to do one of “collaboration”…but this cohort developed a pretty powerful map of academic collaboration that we will be sharing! 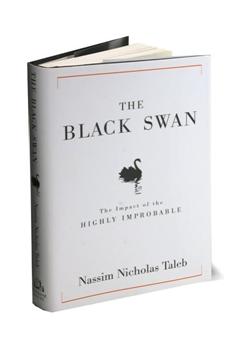 Last night – as a way to unwind after a full day – I started reading The Black Swan: The Impact of the Highly Improbable, by Nassim Nicholas Taleb (2007). Bad mistake…as I immediately saw a lot of relevance to what we are doing this week. I am not very far into the book, but here are some early take aways. The book takes its title from the “fact” that Europeans knew for a fact that all swans were white until black swans were discovered in Australia – which immediately upset the established norm. Taleb says that there are numerous black swan examples, and that they carry three characterisitcs:

– It carries a massive impact, and

– after the fact, we concoct an explanation to make it appear less random and more predictable.

9/11 was a Black Swan, as are many of the applications we use online such as Google. In fact, I was thinking last night that Thomas Friedman’s The World Is Flat was just such an after the fact explanation of events that were not predicted and carried a massive impact.

The lessons from black swans according to Taleb is that we should pay less attention to what we know and more attention to what we do not know – as it is the unknown, unpredictable things that have the huge impacts. We focus in on specifics when we should focus on generalities. As Taleb noted, predicting the future based on the known is a somewhat silly exercise, as it tends to be the unknowns that drive the future.

Okay…this does put a different spin on things. Yet, as one who spins a lot of time immersed in Web 2.0 apps – most unknown by the field at large, I begin to wonder whether I am swimming with black swans or am I just seeing the world through a different lens? It makes you consider faculty development (or workplace development) a little differently if you focus in first on the unknowns and their potential impacts before jumping to the specifics of how to upload a powerpoint to SlideShare. Jeff often notes that I have been transformed this past year in part due to the social nature of the web. To me, the social side of the web is a big black swan that none of us saw a few years back and yet take for granted today.

Food for thought as we move in to day three of our Institute!

4 thoughts on “Teaching and Learning With Technology Institute”