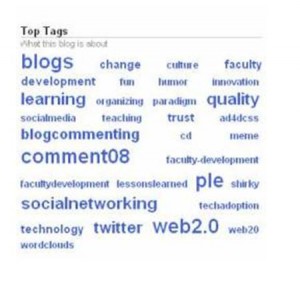 And I’ll be able to list numbers again this year. I have done workshops, presentations, published an article, consulted, and served a number of faculty.

Yet this year feels different.

Since submitting my annual report last June, I have begun using delicious as a communication and networking tool, placed material on SlideShare and received feedback from people I have never met. shifted from reading blogs to active blogging, and become an active Twitter user. It has been a transformative year for me. For more than a dozen years, I have been enamored with the technology. Now suddenly, I have become enamored with the connections and this network that has accepted me.

This “social” stuff has become a big part of my life and my job…and I am struggling with how to capture that in the bureaucratic necessity of an annual report!

Clay Shirky, in a video presentation, made an interesting statement about the context of his recent book Here Comes Everybody. He said:

“We’ve reached an age…where this stuff is technologically boring enough to be socially interesting.”

He goes on to explain that the technology – whether computer or mobile – has become so ubiquitous as to be taken for granted, and as that tipping point was reached, the social effects began to manifest themselves.

I could cite numbers – I follow and am followed by 138 people in Twitter (or 137 plus the Mars Phoenix lander). I have 45 people in my delicious network. My blog has had 1,900 visits in the past four months. I worked with 10 other faculty in a year-long Faculty Learning Community exploring engaged online learners. But, I am increasingly aware of the people behind those numbers.

I value my colleagues here in our Center – Jeff Nugent and Bud Deihl, who swim in these waters with me.

I value my students, who dive in to these same waters and grow to see the relevance. At a dinner last night, I met up with some of my grad students from last Fall, and the first thing they started talking about was how much they continue to use delicious!

I value some connections made a year ago, such as Eduardo Peirano (Uruguay) and Gabriela Grosseck (Romania) – who opened my eyes to an international perspective…yet a perspective similar in many respects to my local one. Closer to home, I added John Krutsch and Barry Dahl to my networks after meeting them at eLearning 2008, and continue to connect with them almost daily four months later.

I value the encouragement I received from superstars like Will Richardson and Wes Fryer, and up and coming stars like Sue Waters and Michele Martin. These four, along with Jeff and Bud, had more to do with my sustaining my blogging now for six months.

I value recent connections such as Ken Allan (a New Zealander who I met through the 31 Day Challenge) and Jon Becker, a fellow VCU faculty who also blogs and Twitters (and his blog is one of the best designed I have seen). 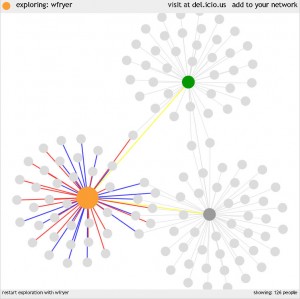 There are dozens of others I could name and I would still leave some out. Suffice it to say that the effects flowing from all of these varied social connections definitely manifest themselves daily in my life and work, and I think I am better for it – I know I am different because of it.

Am I making a mountain out of a virtual molehill, or is transformation occurring to others besides me? I would be interested in your thoughts and comments.