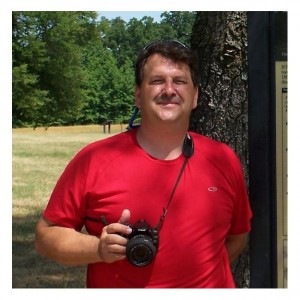 An unexpected pleasure Friday night and Saturday – my old friend Perry Hidalgo and his son came through town and spent the night. I first met Perry 11 years ago when he was an adjunct at Herkimer County Community College in New York where I was a dean. I hired him as a full-time professor in computer science there and celebrated with him and his wife the birth of Graydon a year later. After I moved to Gwinnett Technical College in Georgia, I found the existing computer science chair there had a Radio Shack TRS-80 on his desk. So after a timely retirement, I asked Perry to apply for the job, which he did and which he got. Perry went on to take his second masters in sports management and start a sports management program at Gwinnett. Through the past eleven years, he has been one of my best friends, so I was delighted that he could swing through for a short visit. We both were up early Saturday and spent time on the deck with coffee talking of old times and education in general.

Perry and Graydon have been on a road trip this summer break to see historical sights (Mammoth Cave, Valley Forge, Niagra Falls…quite a list). So before they headed back to Georgia, we spent the morning at Petersburg Battlefield. I had not yet had the chance to visit this site in the two years I have lived in Richmond, and always wanted to. You may remember the beginning of the 2003 movie Cold Mountain starts with the Union army attempting to breach the Confederate fortifications by mining under the wall and packing it with explosions. The explosion was a big success but the follow-up attack was a miserable failure, and the Petersburg siege went on another 9 months. 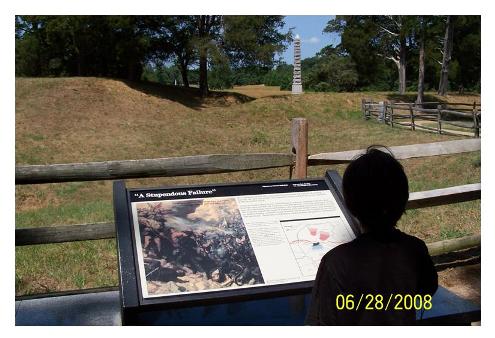 Graydon – as any 9 year old – had a ton of questions, which Perry and I had fun answering.

It was a too short visit, but delighted it occurred!