I did not attend NECC 2008 but I have found some of the blogs and tweets fascinating. It seems there is a bit of angst in the edublogger world by some of the people I follow and find insightful. Quite a few people were disappointed and at odds on next steps. I am probably taking these way out of context, but some impressions that jumped out at me:

– Sheryl Nussbaum-Beach noted that this year’s conference was not the same “love-fest” as the one the previous year.

– Jeff Utecht felt the conference had outgrown its effectiveness and was too fast paced.

– Vicki Davis stated that she felt overwhelmed and unimportant after the conference.

– Will Richardson felt he was seeing the same old stuff. In fact, he blogged:

“I came to NECC in a bit of an edublogger funk, and that funk continues in some respects. If you’ve been reading this blog for any length of time, you know that’s not unusual. My interior monologue is fills with peaks and valleys, and right now, I’m once again struggling to define and focus where the best use of my time and thinking is. For the past two months, I have read very little from the education folder in my aggregator; simply, not much has been resonating. To be honest, very little in the last six months or so has felt new, a view that a couple of others at NECC seemed to share. I’ve been drawn to reading outside the usual suspects, thinking hard (once again) about the scope of this community and its reach. Thinking hard about change, about what is and isn’t changing, and how maddeningly slow it all seems.’

Will’s words rocked me a little. I am a bit of an early adopter, and many of the bloggers I follow are either innovators or early adopters themselves. But it seems many are becoming irritated by the slow pace of change.

Okay – change can be slow, but in taking the long view, really amazing! In reflecting on my own career, I can remember when computer screen color choices were green text or amber text on a black screen in the pre-GUI days. We definitely would not want to go back to those days! In one generation we have come a tremendous way – so much so that now days we ed techies get upset if major change is not happening on a annual basis (or daily basis). We used to say “That is so last year….” and now we seem to be saying “That is so 9am!”

We need to collectively remember that while much of the social media and web-based instruction is no longer new to us, it is still relatively new to the majority of our colleagues. And that suggests we still have work to do! 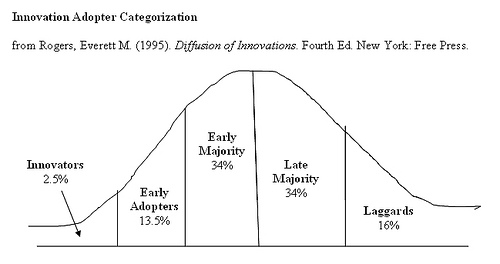 We innovators and early adopters have a clear leadership role to play in facilitating adoption by the much bigger population of early and late majorities (and I write off the laggards). I liked the comment Brett Hinton made:

“Real transformation in any large established system has generally always taken time. I think the feelings about this year’s NECC conference might be indicative of the fact that educators who want this change are coming to grips that this change is going to take some time. Sustained effort and patience are going to be equally necessary components to accomplish the change we want to see. Hopefully people like Will and David and the many others don’t lose patience and give up. Change is happening, but slowly, and we will get to that tipping point we want if we just keep plugging away at both implementing these ideas and sharing them with others.”

I agree! I also liked the tone of Stephanie Sandifer’s blog where she urged us to become more proactively vocal in reaching newbies and the majority.

We are the minority, but we have seen the potential. Let’s keep plugging away!