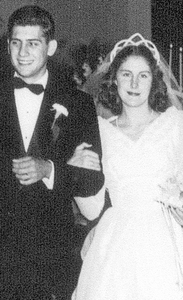 My wife and I are down in Augusta GA to celebrate my parent’s 60th anniversary.  Here is a picture from August, 1948, when my parents wed in Atlanta GA.  I came along 2 years later, followed by my two brothers.  They were typical of the Greatest Generation – hard working, dedicated, and committed to making their sons’ lives better than theirs.  Thanks to them, I was the first in my family to attend college and go on to a successful naval career and doctoral studies.

Last night, my brother and his wife hosted a dinner at which a dozen friends from Atlanta and South Carolina came to Augusta to attend.  As much as a 60th anniversary says about a couple, the strengths of the friendships they made say even more.

The local Augusta paper printed a nice anniversary announcement this week.  I could not resist running it through Wordle, which crafted the following image.

One thought on “Happy Anniversary, Mom and Dad”