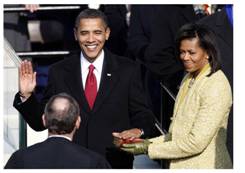 I am sure that I will not be the only one blogging today about President Obama’s Inauguration speech.  Bud Deihl and I walked over to the student commons and watched it with several hundred students and staff.   Our new President crafted a wonderful speech with both hope and purpose in mind, founded on the idea that we are all in this ship of state together.  Looking out over the cheering students, I could not help but reflect not only on the journey, but also on the idea articulated by another young President that indeed, the torch had passed…and that we will be okay as a nation.

I probably will also not be the only one using Wordle today, but I like the way certain words jump out at you from his speech.

As a retired Navy Commander, his call to service for this country really resonated with me.  I was reminded as I listened to Vice President Biden take his oath of office that that particular oath was the same one I swore to as a Navy Ensign.  It is an oath of allegiance to an idea, not a person…something I have always held dear.

As several Twitterers noted, the White House website rolled over to the new administration’s site on time at noon.  It proclaims that change has come to this country.  I was happy to hear the word “digital” in Obama’s speech, and it appears likely that the digital age will be part of that change…and that these changes will impact education.  I see that as positive.

I have not blogged for the past three weeks for a combination of reasons.  Some of it is old habits.  When I was a midshipman at the U.S. Naval Academy, January was historically known as “The Dark Ages.”  Old habits die hard.  I was also sick for a week, followed by the hectic nature of a semester start.  The Dark Ages began to thaw this weekend when several of my students remarked in our online class that they were excited and enlightened by the first week’s activities!  I was simply introducing Delicious and Web 2.0 to these school teachers, but I spend so much time immersed in Web 2.0 that I can forget how exciting and refreshing it is to discover it!

So today’s speech seemed to lift those dark feelings off me.  It may still be January, but I am looking forward to this semester and the coming days with a renewed sense of hope and purpose.  I know I have a part to play in education…and I will look for opportunities to serve in other ways as well.

The speech today merged these two concepts into one unified direction for our country and all of us.  I’m stoked!  🙂

3 thoughts on “Hope and Purpose”