My final day at the League for Innovation’s 2009 conference was just as informative as the first.  The conference goes on for another two days but too much going on at home for me to stay.  Besides, jet lag is finally kicking in.  I woke up at 3am today and then crashed at 4pm local time!  Of course, it will probably be worse when I fly back to the East Coast! 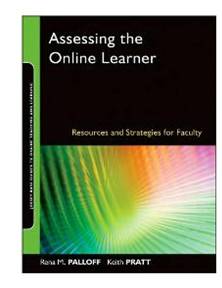 So after a delightful breakfast at 6am with another East Coaster who could not sleep, I headed to my first session of the day at 8am with Rena Palloff and Keith Pratt. Aaron Parecki had set up a Twitter feed using the hashtag #lfi09, so I tweeted through this and subsequent sessions.

I was familiar with Palloff and Pratt’s earlier work Building Online Learning Communities: Effective Strategies for the Virtual Classroom (2007).  My review of that work is here. Now they have followed that work with a new book – Assessing the Online Learner: Resources and Strategies for Faculty (2008).

Their session this morning was on Assessment and Academic Honesty in the Online Learning Community.  They mapped typical question types to Bloom’s Taxonomy, suggesting that most lecture and reading based multiple choice or True-False questions only tested lower levels of the Taxonomy.  There was some pushback from some of the licensure disciplines (like nursing) that their national license exam was vetted.  Rena said maybe for nursing, but most discipline license exams were poorly written and did not test the application of knowledge.  Their point was too many tests online are written for faculty convenience (self-grading by Blackboard or Angel, for instance), as opposed to aligning with the course learning objectives and mode of instruction.  They do like using tests and quizzes in formative ways, such as self-evaluation practice exams.  They were surprised (as was I) that some faculty develop comprehensive rubrics for grading essays or discussions online and then do not give those rubrics to the students.  They showed their rubric, which aligns well with one I use for online discussions.  Summarizing general knowledge is C-level work while (and I like this) “Making me the professor think” is A-level work.  Their bottom line is that assessment needs to be authentic.  They suggested multiple forms of assessment including e-portfolios, student-completed rubrics, and demonstration of knowledge through case studies and simulations.  I was particularly taken with the concept of turning rubrics into assessment instruments that are completed by the students, demonstrating back to the professor how they mastered a principle or outcome.

The general session at 9:15 had two highlights.  First, Carol Twigg was given the annual ETS / Terry O’Banion Prize.  Her focus on course redesign has had a significant impact on higher education.  The second highlight was the keynote address, delivered by Wes Jackson, President of The Land Institute.  It was sort of An Inconvenient Truth but scarier.  Jackson discussed the crisis that has been building for 3.5 billion years, where organisms consume their resources until they fall off the petri dish.  He noted that the 22-year-old in our classes has lived during a period in which 54% of all oil ever consumed was consumed in his lifetime.  Our ancestor who died in 1930 never saw population doubling in a lifetime…and those born in 2050 probably will not either.  He noted that the new president is still following the growth model, but that growth cannot be sustained even with renewable energy sources.  He suggested that the growth dogma was not being seriously questioned by anyone and the it should be.

Two comments resonated with me.  First, he said that the role of education was not to train but to educate…and educate meant developing critical thinking skills.  Second, he said that if you were working on something that could be completed in your lifetime, you were not thinking big enough!

Needless to say, a thought-provoking session!

I then attended Steve Holland‘s session on Scanners and Readers: Designing Online Content to Promote Learning.  Steve was in my workshop yesterday, and today unfortunately was plagued with internet problems (and I had no wireless signal).  In spite of these setbacks, he did an excellent job of leading a rich conversation around content online.  His background was in journalism, and he discussed page layout in the USA TODAY newspaper with online content.  The newspaper is designed with scanners in mind, so that they can “enter” the paper from multiple sources.  In the same way, Steve uses LessonBuilder to craft online content that can be entered from the top or from sidebars, and then uses multimedia to pull readers deeper into the content.  One faculty stated that he was worried that facilitating scanning inhibited students from learning how to actually read deeply.  I countered that it was our job to create the environment where the scanning led to relevant reading, and if the students understood the relevance, they would in fact read deeper. 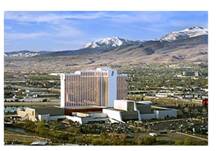 I took a break and a walk outside to enjoy the snow capped mountains on the horizon and walk along the Truckee River.  The picture at left shows the lovely location in which the Grand Sierra Resort is set in Reno.

I then returned for my final session with Judy Baker and Martha Kanter of Foothill-De Anza Community College District.  They discussed their efforts to establish at the community college level the same concept as the MIT OpenCourseWare initiative: The Community College Consortium for Open Educational Resources.  They have identified about 250 textbooks so far under a grant funded Community College Open Textbook Project.  The biggest benefit is lower costs for students, but there are challenges as well, such as faculty and student resistance to online books, limited availability (so far), and questions about articulation and assessibility.

By this point, I was wiped out, so I gave in to jet lag and took a nap!  But I did go back down to the reception where I once again got a chance to talk to Rena Palloff, Keith Pratt, Jim Bailey and Tamara Pinkas of Lane Community College, and Steven Saltzberg of SoftChalk.  It was a nice finish to a super conference.

One thought on “Day Two at Innovations 2009”