For the third year in a row, I had the opportunity to attend the University of Mary Washington‘s annual Faculty Academy with my colleagues Jeff Nugent and Bud Deihl.  This was the fifteenth year in which UMW faculty have shared their creative ways of using technology in teaching and learning.  It has been interesting to watch FA evolve over the past three years.  It has gotten smaller but more intimate.  Bud Deihl noted today that it has shifted from faculty evangelizing about technology to more of a demonstration of how creatively their students have used technology in the learning process.  I saw a good deal of that, but I also saw faculty generating conversation around both their ideas and their concerns.  In other words, it was a very healthy discussion about teaching and learning with technology.

With so much packed in to two days, I suspect I should do this reflection in two parts.  Somewhat arbitrarily, I will stick to day one and day two.  So here are reflections on day one.

The very first session was a panel discussion with Steve Greenlaw, Janet Asper, Teresa Coffman, and Marie McAllister on “Is Course Design Only for Online Courses?”.  The genesis of this session was Joshua Kim’s Inside Higher Ed post on “The Primacy of Course Design.” Kim listed 8 fundamentals for solid learning design, and noted:

“Fully online courses, and programs, have the advantage that the LMS is the only classroom available. Online faculty are willing to go through a course design methodology as part of their compensation for preparing to teach online.”

The question looming for this panel – are not these same fundamentals necessary in face-to-face instruction?  Their answers appeared to be “maybe.”  They seemed to all recognize that Kim’s fundamentals are “good,” but they went back and forth on how explicit they were in their teaching.  One noted that her winging it was possible because of her years of experience.  Another noted that she would like to be more explicit, but that took time – time she did not have.  It was noted that there were good online courses and bad, just as there were good f2f classes and bad.  Design is part of the mix, but as Jeff tweeted to me, teaching practice and interactivity are as important if not more so as design, whether online or in a classroom.  I liked Steve’s closing point that his design was based on “how will class time be used” to achieve learning objectives rather than focusing on the content or the technology.

As usual, UMW FA 2010 brought in some wonderful keynote speakers.  The first was Siva Vaidhyanathan of the University of Virginia, who spoke on the Googlization of Higher Education.

Siva is currently finalizing a book on Google, and noted how hard that project was, as Google continued to change and morph.  His talk focused less on Google per se than it did on an emerging culture in which Google is embraced by both faculty and students.  He stated that in the rush to adopt new technologies, we in higher education should not reject centuries of wisdom in the educational process.  There were some interesting comparisons between the corporate Google and institutions of higher education.  He suggested that universities had sprung from monasteries, which were essentially big piracy machines copying others’ work!  Google’s founders were children of academicians whose culture mimics in many ways the academy (with many members coming straight from academia).

Siva argued against the findings of two recent books: Jeff Jarvis‘ What Would Google Do? and Anya Kamenetz’s DIY U.  While higher education definitely needs updating, Siva saw it as wrong to simply throw out the educational process in favor of just-in-time self-development.

Siva spent most of his talk on the googlization of students, research, and education.  He noted the huge shift by institutions towards cloud computing, GMail for students, Google Scholar, use of Google Docs and Google Reader, and asked the question – do faculty and students understand the vast data mining going on behind their use of these Google systems?  I would opinion that the answer is no…including in many ways myself.  He asked for a show of hands of who present (and it was a fairly tech savvy group present at Faculty Academy) had taken the time to modify their settings in Google regarding privacy?  Out of the room, maybe 3%-5%.  So if the Google default is the maximum vacuuming of data, are there issues with that?  Of course, Google is not the only one – Facebook has been in the news lately regarding its own data mining and privacy settings, with the default again being wide open (See danah boyd’s reflective piece on Facebook and “radical tranparency” (a rant)).  Like danah, Siva saw Facebook as out of control compared to Google.  Just look at this graphic from FastCompany on Facebook’s privacy settings! (Click here for enlarged view) 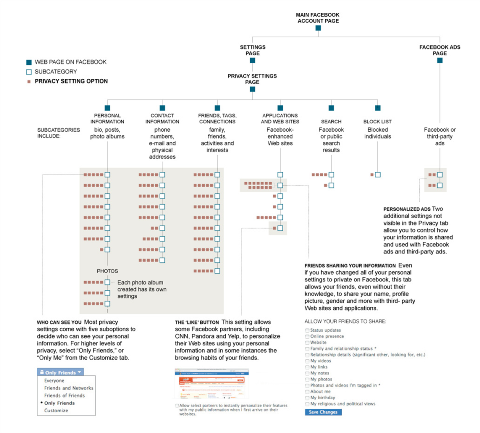 Much to think about…and it raises questions for those of us in faculty development as to how to address these questions.

People with no IT background installing complicated computer systems in a single afternoon. Amateur chess players beating both grandmasters and supercomputers using off the shelf software. Your spouse cooking a meal like a master chef — without any formal training. Coworkers communicating to someone across the world in a language they are just encountering for the first time. This is not science fiction — it is the average person’s life today, in 2010. Just-in-time instruction is the hidden revolution that has already radically changed how we live.
.

Mike started by suggesting that higher education was marked by the banker model of instruction, where people come to IHE’s to bank and save knowledge that they might need in the future, when they can call on that knowledge and withdraw it.  His abstract and talk gave examples of how the web has flipped this model so that people can  search for needed information and train themselves as they need that training. Mike had the room research how much electricity we would need to cut to equal the carbon savings if we switched to a vegetarian diet.  It was fascinating to see how the different tables came to similar answers…with little questioning of the veracity of the websites we used (back to Siva’s talk).  On Twitter, there was an interesting side conversation by those not present on whether we would want our doctors using just-in-time instruction…and some agreement that – YES, we want our doctors using the web to stay current in the fast changing medical world.  Mike suggested that the liberal arts are about discerning truth…and that remains relevant in a world of informal learning.

A side comment by Tom Woodward nearly brought tears to my eyes.

The day (for me) ended at a session led by Julie Meloni, a newly minted Ph.D. from Washington State University.  Her session was on the basics of Twitter, though it did not get into instructional uses to the degree to which I desired.  Nevertheless, it was interesting to hear her discussion about the grammar and rhetoric of Twitter – themes she continued the next day in her keynote.  She did introduce me to Twapper Keeper – a neat tool for archiving tweets.

Energy running out, so will complete this post and come back to reflect on day two.

3 thoughts on “Reflections on Faculty Academy 2010 – Part One”