I have enjoyed two full days at the 2012 Educause Mid-Atlantic Regional Conference in Baltimore.  I previously posted materials from our presentation and my Twitter 2o2 session.  By the way, Skyping Jon Becker in for Twitter 202 went just fine, and Jon added some great observations on the personal, professional, and academic use of Twitter.  Thanks again, Jon, for being a part of this session!

Before they disappear, check out the rich conversation that has  been going on backchannel using the hashtag #marc12.  As of this evening, 818 tweets have been sent.  Jeff Nugent clued us on to The Archivist during our Twitter 202 session this morning, and I just used it to capture these 818 tweets and run some analytics.  Looks like we added quite a few new “tweeps”.  I spotted that Derek Bruff was in the top dozen twitterers for MARC 2012…and he was not even here.  The power of a distributed learning network! 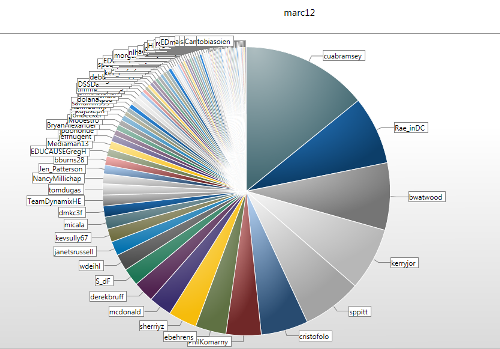 Randy Bass gave a great keynote on “Disrupting Ourselves: Cherished Assumptions, New Designs and Problem of Learning in Higher Ed.”  During his talk, I could not resist shooting a picture with my iPad that showed attendees shooting pictures of Bass’s slides.  As Bud Deihl noted, this was not your granddad’s conference!

Last year, Randy talked about the problem of learning in the post-course era.  His talk yesterday continued this notion of the change needed in higher education.  He talked about courses with low impact versus courses with high impact, and noted that in many cases, those courses with little impact are what we in education call “curriculum”.  The high impact courses are internships, capstone courses, student research and service learning opportunities.

One of the more interesting sessions was by Jim Jorstad, the Director of Educational Technologies at the University of Wisconsin-La Crosse, entitled “Making Teaching and Learning Authentic- Engagement Through Social Media in Politically Charged Times.”  Jim showed how video he filmed of protests in Wisconsin and posted through YouTube and CNN iReports were picked up and widely distributed, which for me was simply another example of distributed networks at work.

Today, Terry Carter and her grad student Jonathon West discussed their student research project.  In “Going Digital: Conducting Student Research in Teams with Web 2.0“, her capstone students used a wiki to collaboratively gather data on a real world problem involving hospital readmissions and literacy, which was cool in and of itself.   What blew everyone away was the student generated digital story at the end to summarize their findings, but also give voice to the patients they interviewed (using actors and Flickr images so as to not violate HIPAA.)

John Shank of Penn State discussed “Learning the Net Generation Way: Reimagining Instruction with Digital Learning Materials.”  A good session for faculty wishing to locate and use digital material, but I thought it was light on “learning” and the so-called Net Generation.  I asked about students building their own digital learning material as a way of learning, and it really was not an area he wished to discuss.  Shucks!

The lunch roundtables were interesting.  I sat in on the Analytics table.  There was a mix of conversation about analytics for academic support, such as recruitment, retention, and logistics underlying academic institutions.  I was more interested in learning analytics at the classroom level.  Of note, an IT member of University of Maryland-Baltimore County noted that his institution would be doing some beta testing of Blackboard’s new analytic service.

That should give you a taste of two days worth of conference.  We wrap up tomorrow and catch the train back to Richmond.

One thought on “Two Days of MARC”