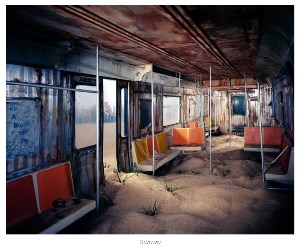 Divergent thinking typically comes out of  annual SXSW conference.  Earlier this month, the conference featured Bruce Sterling, a noted science fiction author, as a keynoter.  Bruce used a phrase from his and Jon Lewbowsky’s  State of the World 2012 post that he had previously used…and which got a bit of buzz:

“The Future Is About Old People, in Big Cities, Afraid of the Sky“

“The future is about old people, in big cities, afraid of the sky. How do I know that? Well, it’s because demographic change is very obvious — people are gonna get older. And the urban change is very obvious — people have been moving into larger and larger cities for several decades. And climate change is super obvious. People can deny all three of them. You can say, ‘Oh, well my town will never get bigger.’ Okay, Austin’s getting bigger by 100 people a day. Or you could say, ‘Oh, well I’m never going to get older.’ Okay, you are gonna get older… I have the feeling I’ve spent enough time talking about it. I’m actually bored with writing fiction about it. I think I’m gonna spend a couple of years trying to get to physical grips with the problem — What kind of life would old people, in big cities, afraid of the sky actually have? I think it’s time to try some prototypes.”

As someone who has reached his Sixties, this pessimistic view is not what I hope my children have in store!  Yet, for today’s post in the 30-Day Challenge, it is instructive to go back to Sterling’s 2012 post.

Multiple perspectives all looking at the same future.  Lebkowsky then noted:

“…I’m thinking H.G. Wells would never have written the hyperpessimistic “Mind at the End of Its Tether” if he’d had a televison set, 24-hour cable, high-speed Internet access and accounts on Facebook and Twitter. Our heads are buzzing with possibility, spinning ever faster into the alternate realities that your various futurisms suggest. I say “realities,” but I’m not sure the word “reality” has much weight these days – more like competing fantasies, in the sense that Kesey et al talked about “the current fantasy” and others of us talked about “believing your own bullshit.” Conflicting, competing narratives are the real games we play…” 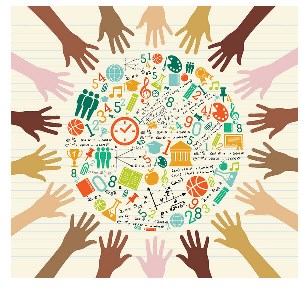 As “experts”, we as faculty spend a lot of time focusing on reality.  We craft lessons with “right answers” rather than competing fantasies.  Yet, with the affordances of the web, both our heads and the heads of our students ought to be “buzzing with possibilities”!  It should be instructive that much of the research in physics today points to alternate realities.  Rather than focusing on answers, how can we bring that buzz into the learning in our classes?

Day 14 – How could I craft my teaching so that students surface and interrogate competing fantasies in the search for today’s truth?

In one of the first global online courses I taught for the University of Nebraska, a Nebraskan gave a textbook answer to a question on educational leadership.  The next post was from a gentleman from the island of Guam, who started his post with “I am Chamorro, and we do not think that way…”.  It was a huge lesson for me on the lens we bring to our discussions.

What buzz do you bring to the discussion today?