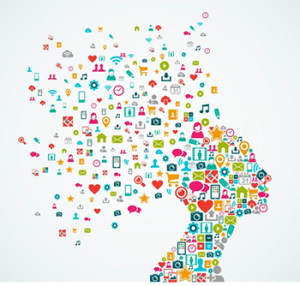 Sometimes you just don’t get to your Feedly in a timely manner…so this morning, I looked back at about 8 days worth of blogs.  Some great posts, but what interested me was some of the connections my mind began to make in this week-plus dive into the blogosphere.

First, Lisa Lane wrote a provocative piece entitled “The Electronic Frontier is Closed.”  She noted that historian Frederick Turner in 1893 announced the end of the Wild West…and that the time had come, due to the current management of information in commercially controlled spaces (Blackboard or Canvas), the web is no longer “open”…and that therefore, it is time to write the history of the open web.

“…So now it is time to write the history of the open internet, the electronic frontier, as Barlow called it. As in the wild west, the freedom that marked the early web would be contained, civilized, and gradually controlled by commercial and government interests. As it closed, the shift in the nature of the space gave birth to new threats. Where on the open web bad disruptors were restrained by the community, commercial spaces made possible abuses never seen before, and controlled by no one. From trolls to cyberhacking to international meddling in elections, the enclosed spaces themselves gave rise to horrors.”

This idea that our learning spaces give rise to “horrors” was echoed in Tony Wan’s EdSurge post on danah boyd’s keynote at SXSW EDU, which noted that critical thinking and media literacy efforts in education are backfiring today.   Wan noted that boyd was not against critical thinking, but rather suggested that the very act of asking questions as a way to challenge narratives had become weaponized and manipulated.  Students have been emboldened to check facts…but how does one check facts if the media cannot be trusted?

Rather than “trust” Wan’s interpretation, I went seeking boyd’s remarks.

The basis for her talk came from “You Think You Want Media Literacy…Do You?“. Some might say “tl:dr”…but this is well worth a complete read!  boyd noted that she has struggled with media literacy…the “active inquiry and critical thinking about the messages we receive and create.”  She stated that media literacy “…is imagined to be empowering, enabling individuals to have agency and giving them the tools to help create a democratic society. But fundamentally, it is a form of critical thinking that asks people to doubt what they see. And that makes me nervous.”

She goes on to quote Cory Doctorow who stated:

“…As I’ve written before, we’re not living through a crisis about what is true, we’re living through a crisis about how we know whether something is true. We’re not disagreeing about facts, we’re disagreeing about epistemology. The “establishment” version of epistemology is, “We use evidence to arrive at the truth, vetted by independent verification (but trust us when we tell you that it’s all been independently verified by people who were properly skeptical and not the bosom buddies of the people they were supposed to be fact-checking).”

The “alternative facts” epistemological method goes like this: “The ‘independent’ experts who were supposed to be verifying the ‘evidence-based’ truth were actually in bed with the people they were supposed to be fact-checking. In the end, it’s all a matter of faith, then: you either have faith that ‘their’ experts are being truthful, or you have faith that we are. Ask your gut, what version feels more truthful?””

boyd noted that most educators are deeply committed to evidence-based learning…but who gets to decide what constitutes a fact?  In my Northeastern class on Technology as a Medium for Learning, we explore validity on the web, as well as digital tools like screencasting and blogging – two mediums that students and teachers can use to self publish their own works.  boyd noted that developing “…media making skills doesn’t guarantee that someone will use them for good.”  boyd discussed “gaslighting” – manipulating media is to pervert the public’s thinking – and how some media is triggering more problems than solutions, such as Netflix’s 13 Reasons Why.

boyd ended her piece by asking what kind of media literacy made sense…and honestly stated “I don’t know.”  She noted that:

“…Empathy is a powerful emotion, one that most educators want to encourage. But when you start to empathize with worldviews that are toxic, it’s very hard to stay grounded. It requires deep cognitive strength…

…our information landscape is going to get more and more complex. Educators have a critical role to play in helping individuals and societies navigate what we encounter. But the path forward isn’t about doubling down on what constitutes a fact or teaching people to assess sources. Rebuilding trust in institutions and information intermediaries is important, but we can’t assume the answer is teaching students to rely on those signals. The first wave of media literacy was responding to propaganda in a mass media context. We live in a world of networks now. We need to understand how those networks are intertwined and how information that spreads through dyadic — even if asymmetric — encounters is understood and experienced differently than that which is produced and disseminated through mass media.”

Across the pond, Steve Wheeler blogged in “It’s a Complicated Business…” that younger academics tend to follow the didactic examples of their own professors rather than trying new approaches to education, because they fear ridicule or loss of face from fellow academics on how they teach.  The UK government is instituting a graded ranking of university courses…which suggests change and improvement, but Wheeler wonders if this will simply drive out good staff who fear change.  Meanwhile, Betsy DeVos at SXSW EDU called for American higher education to “rethink” our approach to one with more entrepreneurship and innovation…themes Joseph Aoun expressed in Robot-Proof.  DeVos stated “…Someone recently asked me. Why hasn’t America’s higher ed bubble burst? This individual was baffled as to why American businesses haven’t yet created their own education programs to equip individuals with the necessary skills, instead of relying on others to get it right…”

In the L&D world, there was a post about the shift from learning to performance.  It noted that the rationale for learning technology had shifted over the years from record-keeping to engagement and now to performance.

It suggested that L&D technology needed to evolve or clients would turn to web-searchers and their own trusted online sources to find the support they needed.

So what connects these posts – from Lane to boyd to Wheeler to James?  The one word that comes to mind is “trust.”  Lane noted that she still believed “…like Barlow, that the freer the space, the less opportunity there is for abusing our fellow human beings.”  boyd argued “…that we need to start developing a networked response to this networked landscape. And it starts by understanding different ways of constructing knowledge.”  Understanding and trust go hand in hand.  Wheeler wonders about the quality of education…and quality and trust are intertwined.  James suggests that refocusing on performance allows for metrics that mean more than the “dark art” of measuring learning.

Like boyd, I certainly do not have answers.  I was simply struck by the common threads that ran through these posts this past week.  J.M Barrie in Peter Pan noted that “All the world is made of faith, and trust, and pixie dust.”  I am not sure which of the three we need more of these days! 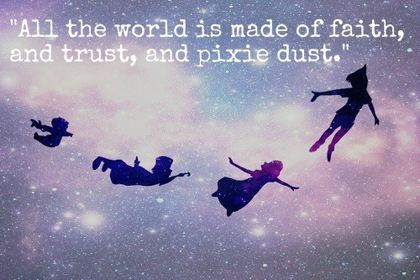 2 thoughts on “Connecting Some Dots”