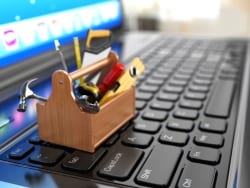 Last week, my Merrimack students were each exploring a different digital tool and reporting on it in their blogs.  You can find their blogs here.  Some I was familiar with, like Trell0, Flipboard, Slack and Canvas.  Others were new to me, including Genially, Adobe Spark, and Google Keep.  Between the posts and the comments, we all learned new things.  Hat tip to Laura Gogia for providing additional information on Genially via a tweet.

Yet, my “tool” moment came not from my students, but from an unexpected loss of a tool during the week.

I am currently teaching three courses – a doctoral course at Creighton, a Masters course at Northeastern, and a certificate course at Merrimack.  I typically spend much of Thursday evening through Sunday evening engaging with these different courses.  So Friday is typically a busy time for me.

As I engage with students either through LMS discussions or through blog comments, I often pull up resources I have previously tagged in Diigo.  For twelve years, social bookmarking has been my digital brain…and Diigo has been my go-t0 platform for the past ten years.  If I save one more bookmark, I will have tagged 7,777 websites using over a thousand tags!

So Friday morning when I opened Diigo, I got … nothing.  After a couple of attempts, I got:

No worries…it would be back shortly.

Except that it did not come back that morning or afternoon.  There were a number of people asking on Twitter if anyone knew what was up…but nothing from Diigo itself.  In fact, it was a bit disconcerting to see that their last tweet was six months ago.  I tweeted:

Anyone on #edtech know what’s happened to #diigo ? Hacked? Closed down? Been off all day.

To which Harold Jarche tweeted:

I lost bookmarks from Furl, Magnolia, and it seems now Diigo. I even pay for the service

So all day Friday, I had to find resources to back up my class comments without the use of Diigo.  I did it…but it was not as fun!

Saturday morning, Diigo was back up…with this tweet of explanation: 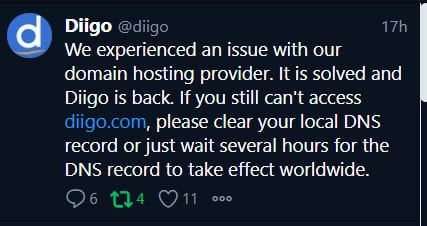 One does not realize how often one uses a tool until that tool suddenly is not available.  My first action once it came back was to download my bookmarks in both CVS and HTML…but with 7,000+ links, neither is very user friendly.  Still, I have them if Diigo goes away again.

Is there a lesson in all this?

My Merrimack students were excited … and rightfully so … in their exploration of new tools.  But they were also cognizant that tools come and go.  One noted:

…I mentioned in another post that I feel like I have tried numerous products and they are all “great” until they aren’t, and I find a new shiny app to try. Like you, I get accused (mainly by younger family members) of not responding fast enough to texts – which grates against me a little – until I realize that their need for instant responses is just that – theirs.  Have also started to look at Trello a little bit, as another member of our class is looking at it. Might also be a good fit for my needs – there I go again! New and shiny…..

What Diigo has provided to me for a decade is organization of the web.  That is still handy..but this 9+ hour outage has me thinking about alternatives.  I would be interested in any suggestions those that read me might have!  Is there something new and shiny out there that can organize my tags in a new way?