In my post last Saturday on eLearning Myths a Decade Later, Sue Waters in Australia asked a good question: 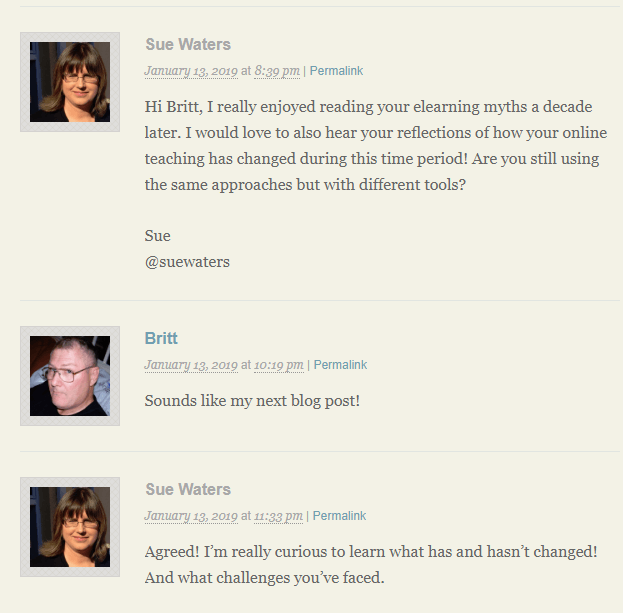 While I first taught online at the University of Nebraska in 1995 (pre-LMS’s), I have been teaching continuously online since 2001.  So I thought I would look back 18 years and 8 years, and compare my practice to today.  In some ways, I have not changed at all…and in other ways, I am fundamentally different.

The constant through these 18 years has been Blackboard.  Eighteen years ago, I was the new Director of Online Learning at Gwinnett Technical College – part of the Georgia Virtual Technical College system.  Blackboard was the primary LMS in use in Georgia.  They shifted to Angel a few months before Blackboard bought Angel…so in essence, Blackboard was king.  I became one of a handful of people certified to train online teachers across the state.  As elearning was relatively  new, in some ways we were trying to replicate what occurred in “real classrooms”…so the courses tended to be teacher-oriented.  Whether in the classroom physically or online, powerpoint was often used to provide content…which did allow for some visual aspects to be used.  Videos were few and far between.  My approach was primarily cognivist, and as I noted in a training powerpoint, teaching online was a three-legged stool: 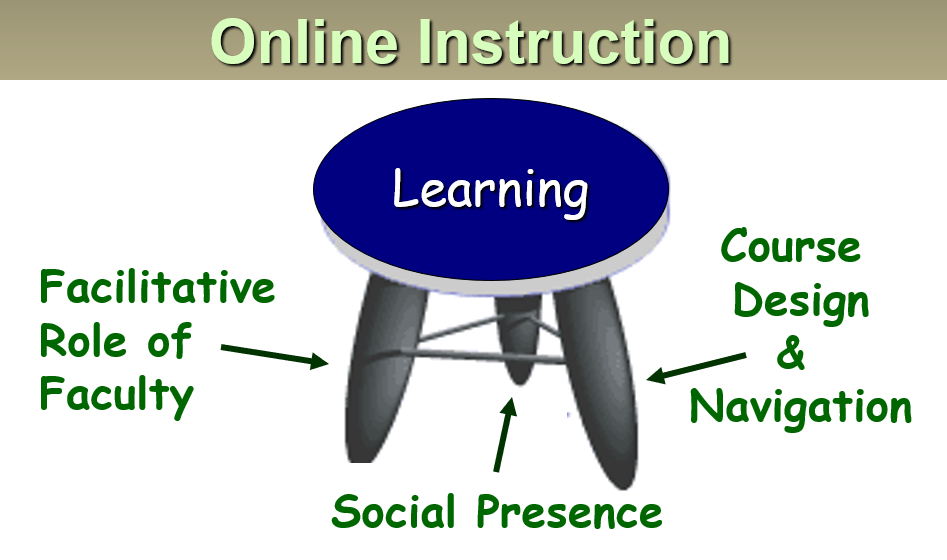 Yet, even then, I was attempting to move beyond a correspondence course approach of provide content and then test.  The courses I designed and the faculty I trained tended to employ grading that was 50% discussions and 50% tests.  Teacher presence was strongly encouraged in the discussions.  Tests employed pools of random questions, such that every student got a different test to mitigate against cheating…and to promote the idea that students could retake tests to improve their scores.  Unfortunately, to develop those large pools of questions, we often used rather expensive textbooks with their publisher supplied support test banks (which were always of dubious quality).  Most of my undergraduate students did their work on desktops…many in the large computer labs on campus…which made “distance learning” a misnomer. 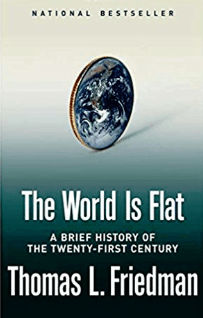 The book that most resonated with me during this period was Tom Friedman’s (2005) The World is Flat, which Friedman updated again in 2006 and 2007.

Jump ahead to 2011 and I was now at VCU as the senior online consultant in their Center for Teaching Excellence.  I was also teaching for the VCU School of Education, and I was developing doctoral level courses for Creighton University’s new Interdisciplinary Doctorate in Leadership.  Most students were now using laptops rather than desktops.  I was working in both Blackboard and Angel between the two universities…and was starting to experiment with building my own LMS using WordPress.  In my courses, I still used a discussion format, but now I was using blogs in some of my classes to provide a more open process for dialogue.  I was now teaching only graduate courses, and I tended to not use tests.  Grading was about one-third discussion or blog posts, one-third based on the quality of comments in discussions and blogs, and one-third on artifacts such as papers or presentations. 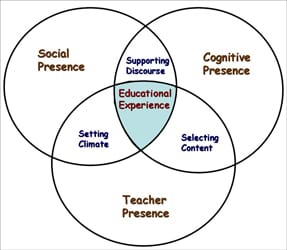 Besides Friedman, I was influenced by Chickering and Gamson’s 7 Principles of Good Practice, which I felt equally applied online as on campus, and by Mishra and Koehler’s TPCK (later renamed TPACK).  Garrison’s Community of Inquiry model and concept of overlapping teaching presence, cognitive presence and social presence was used as a foundation for our course designs.  My philosophy had shifted to more of a constructionist approach, which made the courses more student-centered than teacher-centered.  These concepts strongly influenced a white paper I published in 2009 with my colleagues Jeff Nugent and Bud Deihl, entitled “Building from Content to Community:[Re]Thinking the Transition to Online Teaching and Learning.”  In some ways, this continued the idea of the three-legged stool above, but shifted the emphasis to the skilled facilitation of the faculty.

Bud Deihl and I presented our concept of weaving the social web into our teaching at the Blackboard World 2009 conference (hard to believe that was ten years ago!):

A decade ago was a fun time to be teaching, as all sorts of tools were emerging that enhanced the teaching and learning within a LMS platform: 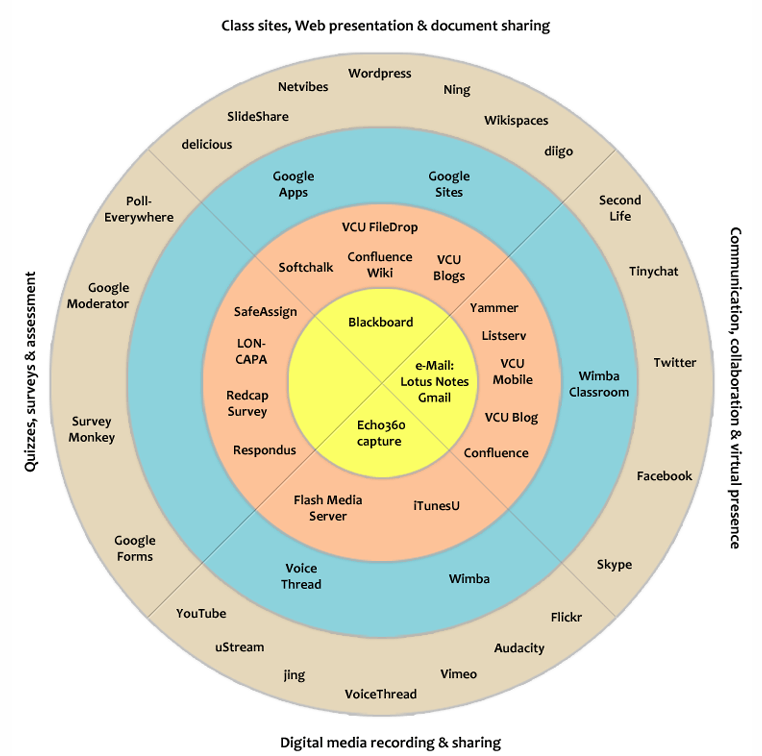 Some of these tools have disappeared in the past ten years…and others have emerged.  Today, there are still amazing options to use with teaching and learning. 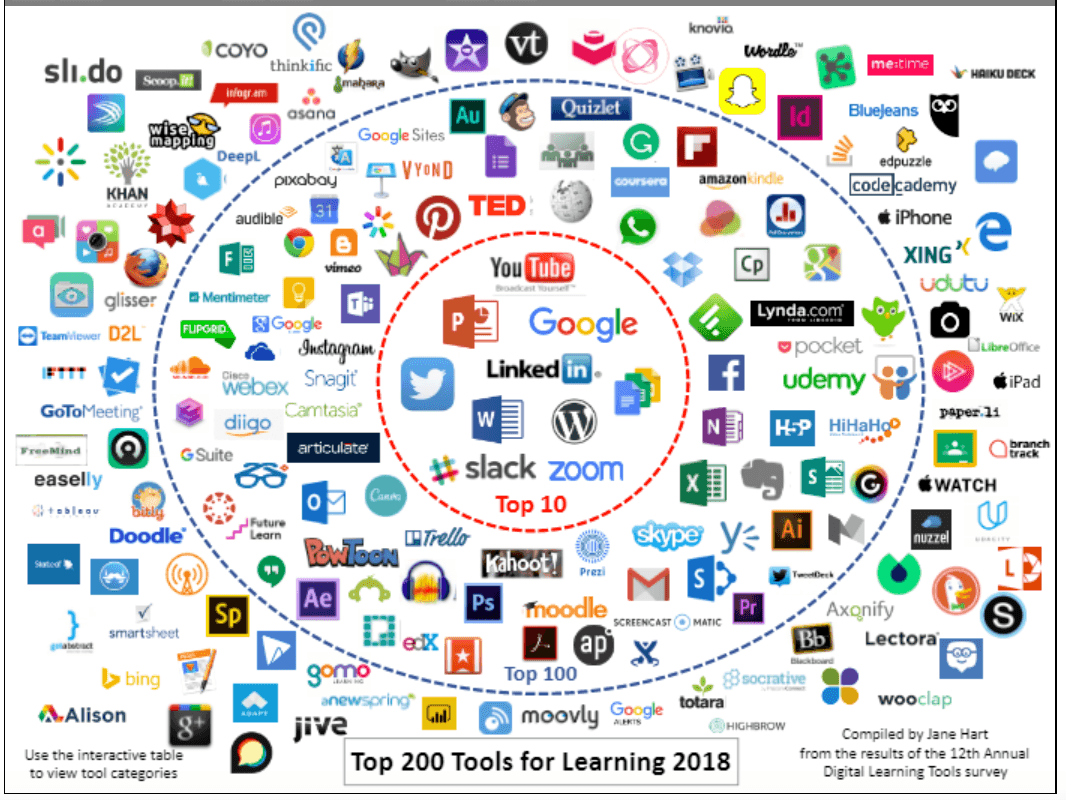 Now, I am retired as a faculty developer, but continue graduate teaching for several universities and colleges.  My two platforms are Blackboard and Canvas.  I have again shifted my approach to one more in line with connectivism.  The grading approach of one-third discussion or blog posts, one-third based on the quality of comments in discussions and blogs, and one-third on artifacts such as papers or presentations continues.  I would suggest that I have made two big shifts in the past decade in my teaching.  I have replaced expensive textbooks with more timely thought pieces, and over the past decade, have used works such as Clay Shirky’s Here Comes Everybody, Dave Weinberger’s Too Big To Know, and Kevin Kelly’s The Inevitable to spark exploration.  The second huge shift has been mobile.  I use Twitter in many of my classes, and I note that students like the engagement that social media provides.  These days, one needs to assume that students will access their classes using smartphones…in which Blackboard still does a lousy job but Canvas does better.  And while Garrison’s Community of Inquiry and TPACK still influence my courses, I have also been influenced by the work of cognitive learning sciences, such as Susan Ambrose’s How Learning Works and Michelle Miller’s Minds Online. 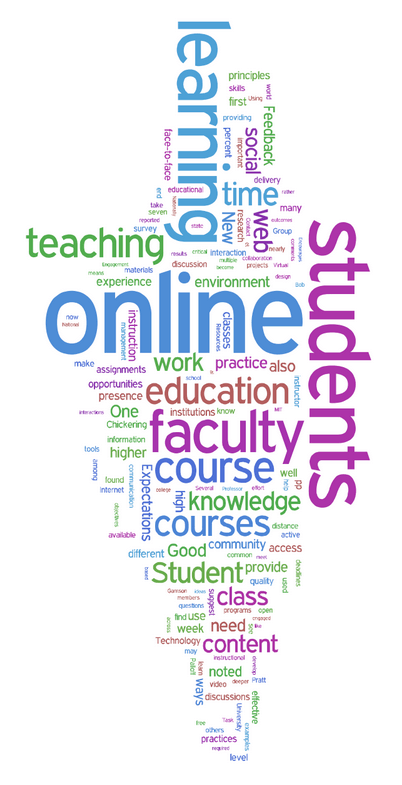 Summing this reflection up, I have obviously enjoyed teaching online…or I would not be still such an advocate for it!  Even with all the amazing edtech available today, I still believe that the teacher is the critical element that makes elearning work – though strong facilitation and presence.  But I have shifted over the years to now understand just how equally strong the teaching presence of my students can be…and I try to design my classes so that their voices are front and center.  If I started as a teacher-centered professor and shifted to a student-centered professor, I would call what I do today as learning-centered, with myself as a co-learner.

As to challenges, I would suggest that just keeping up is one challenge…but my Personal Learning Network of bloggers and tweeters has certainly helped me…as have my students.  I use the term co-learning, as I continue to learn from my students every term!  Another challenge may lie in access, as we seem to be a global society increasingly split by the have and the have-nots.  I have been extremely fortunate in both my career trajectory (right place at right time) and by the all the privileges that come from being an old, white male.  Those of us that are privileged need to acknowledge that privilege and work to better those that have not been.

The next ten years should be equally amazing, as we humans begin to partner with artificial intelligence to enhance learning.  I am looking forward to the continued learning this journey will provide!

7 thoughts on “Changes in Two Decades of Online Teaching”