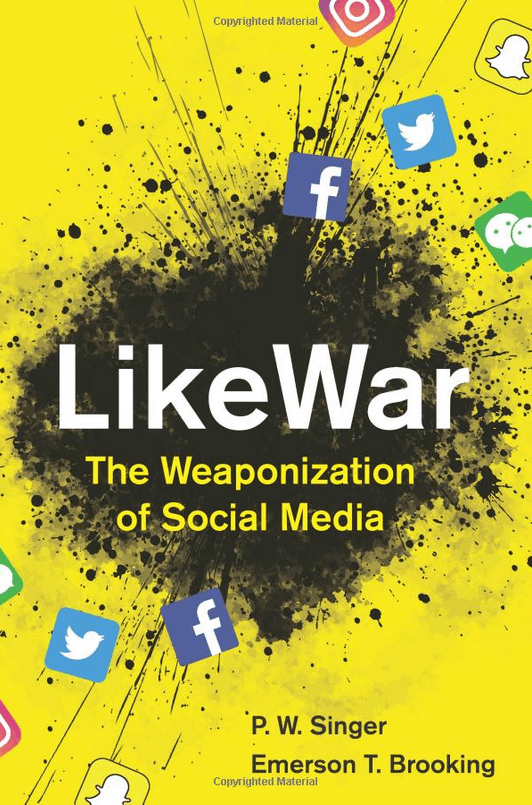 I have been reading P.W. Singer and Emerson T. Brooking’s new book LikeWar: The Weaponization of Social Media.  Tuesday evening, I was able to attend a talk that Emerson Brooking gave at the Robertson School of Media and Culture at VCU. They recorded the talk, and I will add that at the bottom of this post. It is worth the hour!

I have been using social media for a decade…and I have been pretty optimistic that the power of the web to pull us together would ultimately improve the lives of people on this planet.  However, my beliefs have been shaken in the past couple of years…and this book helps explain that.  Emerson’s talk followed many of the main points of their book, which Washington Post columnist Leigh Giangreco noted “…is not a warning about tomorrow’s war — it’s a map for those who don’t understand how the battlefield has already changed.”

It was not a very optimistic talk nor is it an optimistic book. Their main point aligns with Siva Vaidhyanathan’s in last year’s Antisocial Media when he pointed out that there were two things wrong with Facebook – how it works and how people use it.  Singer and Brooking apply that same lens to social media in general.  They discuss the social phenomenon of homophily –

– defined as the tendency for people to seek out and be attracted to those who are similar to them.  Online items – true or not – are sustained through the algorithms by the number of people who like and share them.  Each “like” drives the algorithm to generate similar content, magnifying the impact.  The authors reported a Yale University study that found that people are more likely to believe a headline if they have seen a similar one before…even when the similar one’s have disclaimers.  They write:

“It didn’t even matter if the story was preceded by a warning that it might be fake … What counted most was familiarity. The more often you hear a claim, the less likely you are to assess it critically.”

It is interesting that the book weaves together stories from three very different aspects – The Trump Presidency, ISIS, and Russian influence – and then shows the similarities in how social media was used to sow unreality as reality.  They noted their common use of 4D’s: “dismiss the critic, distort the facts, distract from the main issue, and dismay the audience”.

It has been interesting to reflect on this book and talk this week as my Northeastern University class on Technology as a Medium for Learning tackles validity on the web.  There has been some interesting pushback on our class hashtag #EDU6323 regarding the role of the individual, the social media company, and government.  As Brian tweeted:

#EDU6323 Interesting that our discussion this week began with how we can help build individual responsibility among our students on the internet, but then many declare that government oversight is what is needed. Does anyone else see the inherent contradiction in these 2 ideas?

Another student tweeted a link to a news feed called AllSides – that supposedly provides news from a left, right, and central point of view.  I had not heard of this…and immediately wonder what algorithms are at work here!

And maybe that gets at the heart of LikeWar.  We used to have a sense of what could be trusted.  Now, we have gone from being critical uses of information to being critical of every source.  In some ways, that leads to chaos…which the enemies of the democratization of the world embrace.

In Emerson’s talk, he showed some examples of Facebook screens from before the 2016 election that were widely shared. 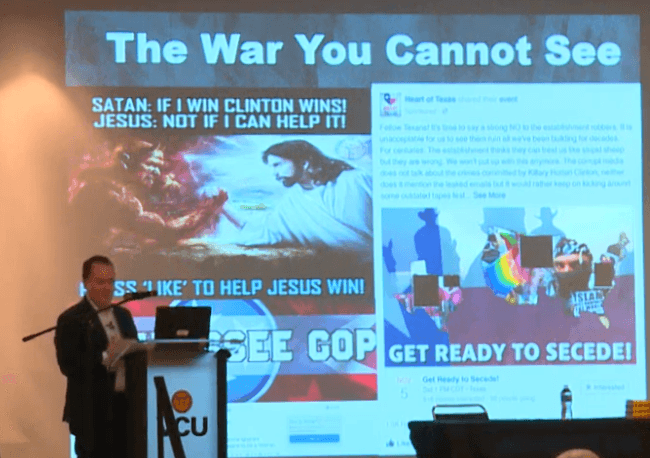 The Click “Like” to help Jesus, the supposed Tennessee GOP FB Group, and the Texas secede pages were all created in Saint Petersburg by the Russian disinformation campaign.  Emerson noted that some 60% of people that share links have never actually clicked on the link themselves to see what they are sharing…they are just going off the headline.

The optimist in me remembers the chaos right after the shootings at Virginia Tech in April 2007.  I was working out in the VCU gym when I noticed a large number of students suddenly texting on their phones.  I glanced at the TV and noticed the breaking news.  At first, the “facts” were hard to decipher, but interestingly, one source quickly rose to the task – Wikipedia.  Over a three day period, the Wikipedia post grew from a few lines to three pages of tight information.  Rumors were posted and then fact-checked and either updated or removed.  The Wikipedia page had better and more up-to-date information than any of the major news media sources.

We live, learn, work, and play in a web-infused world where reality and unreality co-exist.  I am struggling to figure out the best way to help my students (and their students) navigate this new landscape. I would like to believe that humankind can – like we did during the Virginia Tech shootings – rise above the negativity and polarization that seems to grip the world today.  But the examples of Donald Trump, ISIS, and Russian disinformation show the dark side of the world.

I would be interested in your thoughts!  How do you work with your students to separate reality from unreality?

3 thoughts on “Social Media as Unreality”