I have been stewing for the past several days after learning about the op-ed by Joseph Epstein regarding Dr. Jill Biden.  In “Is there a Doctor in the White House? Not if you need an M.D.“, Epstein puts down women and those holding Ed.D’s.

In the piece, Epstein noted that he does not have a doctorate or any advanced degrees, earning a B.A. from the University of Chicago while serving in the Army.  He noted that he taught at Northwestern for 30 years without a degree … and alluded to the supposition that “…calling oneself Dr. is thought bush league.”

Well, Mister Epstein, I proudly earned my Ed.D. from the University of Nebraska in 1996.  I have been chairing Ed.D. dissertations from Creighton University for the past five years – 11 successfully completed to date with another 6 candidates working through the process.  I am proud of each and every one of them.

In the piece, Epstein boasts of his “years” as a university teacher … but it is noteworthy he has not taught for Northwestern since 2003, and that Northwestern has correctly called his piece “misogynistic” and “noxious”.

The Chicago Tribune reported that “Northwestern’s Department of English removed Epstein’s web page from its list of emeritus faculty and also released its own response to the op-ed, reiterating that Epstein has “not taught here in nearly 20 years” and his piece “casts unmerited aspersion on Dr. Jill Biden’s rightful public claiming of her doctoral credentials and expertise.”

I also saw this tweet (which I cannot verify) … but it is troubling in that it demonstrates Epstein may have issues acknowledging smart women: 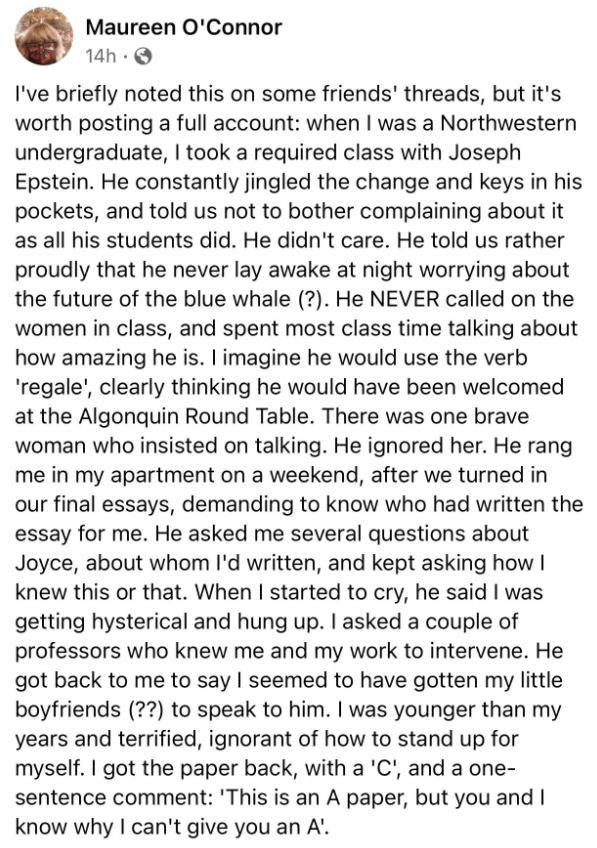 One cannot really understand why Epstein was moved to write this op-ed (or why the Wall Street Journal was moved to publish it).  We have just endured four years of top leadership putting down people rather than lifting them up. Perhaps Epstein felt emboldened to follow the example of President Trump and put down a smart woman.  As a white male, I am ashamed at the actions they have taken.

I hope we are moving in to a more enlightened time with the election of Joe Biden and Kamala Harris … and a First Lady who wants to continue teaching in her community college while in the White House.

I spent 22 years in the U.S. Navy, and I still feel the power of the oath I took as a Midshipman at Annapolis and as a Naval Officer:

I SOLEMNLY SWEAR THAT I WILL SUPPORT AND DEFEND THE CONSTITUTION OF THE UNITED STATES AGAINST ALL ENEMIES, FOREIGN AND DOMESTIC; THAT I WILL BEAR TRUE FAITH AND ALLEGIANCE TO THE SAME; THAT I TAKE THIS OBLIGATION FREELY, WITHOUT ANY MENTAL RESERVATION OR PURPOSE OF EVASION; AND THAT I WILL WELL AND FAITHFULLY DISCHARGE THE DUTIES OF THE OFFICE ON WHICH I AM ABOUT TO ENTER, SO HELP ME GOD.

The Constitutional process has run its course and through the Electoral College, has named Joe Biden as the next President of the United States … and by default, Dr. Jill Biden as the next First Lady.  Epstein’s attempt to smear her says less about her than it does about him. This strikes me as an insecure man hiding behind academic freedom and First Amendment rights to belittle the incoming First Lady … borderline domestic enemy!

It is “enlightening” to see how the incoming First Lady responded: 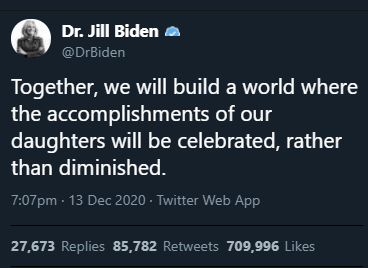 Best of luck to Dr. Jill Biden, both as First Lady and as an accomplished community college instructor.