Jim Lang is out with his Second Edition to Small Teaching.  Anyone who follows me knows that I have liked this series, blogging about the First Edition here and the companion book that Flower Darby and Jim wrote on Small Teaching Online here.

I first met Jim Lang at a local brainstorming session in Boston in 2015 when I worked at Northeastern’s Center for Advancing Teaching and Learning through Research.  Jim was sitting next to me, and I noticed he had with him a new book he had just bought called Minds Online, by Michelle Miller.  I asked to look at it … and Minds Online ended up becoming the textbook for my Technology as a Medium for Learning course at Northeastern.  So I have Jim to thank for finding that useful book, and Jim references Michelle’s work in several places in both editions.

Jim defined small teaching as “…an approach that seeks to spark positive change in higher education through small but powerful modifications to our course design and teaching approaches.”  Jim attempted in both books to suggest small changes that could be implemented immediately, such as brief 5-10 minute classroom activities, one-time interventions, or small changes in course design or communication. However, it is apparent that both the pandemic and Jim’s forced move online impacted his thinking about small teaching!

His three section layout (Knowledge, Understanding, and Inspiration) remained the same, but Jim moved some chapters around and changed the direction in a couple of them in this latest edition.  Here is a comparison of the chapter headings in the two editions: 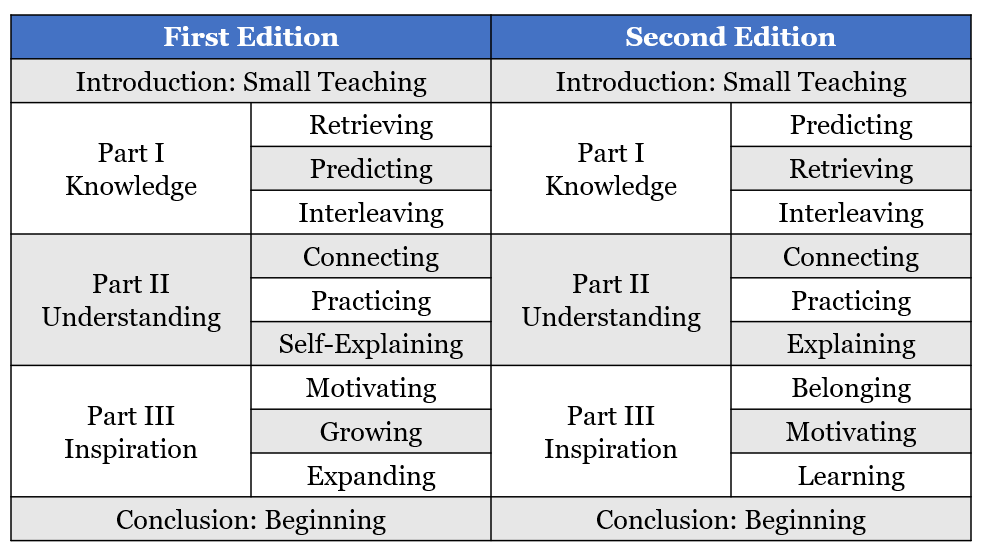 I like the changes Jim made to this Second Edition.  Some stories are updated due to the pandemic, but where I noticed the changes the most were in the models suggested in each chapter.

In Part I on Knowledge, Jim moved from “predicting” to “activating prior knowledge.”  His model on clicker predictions became the broader and more encompassing polling predictions.  The Cumulative Learning in Interleaving was split into two models – Cumulative Exams and Cumulative Quizzes.

In Part II on Understanding, he introduced a new technique called Connection Notebooks…helping students connect the dots.  He added a model on Examples, Analogies, and Reasons, which reminded me of techniques Enoch Hale used to explore when we both were at the VCU Center for Teaching Excellence.  His chapter on explaining moved from simply self-explanations by students to the broader idea of students growing as they first self-explain, and then explain to others.  I have for years liked the pedagogical theories of Randy Garrison and others in the Community of Inquiry model, and Jim captures this perfectly by moving the idea of “teaching” from just the instructor to the students as teachers.

Part III had the most changes: 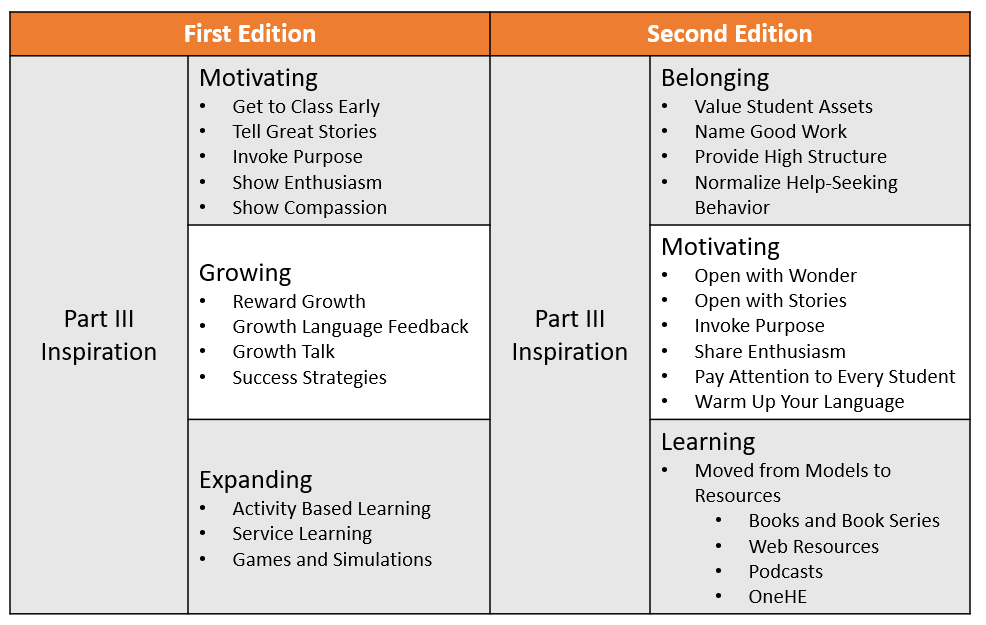 I particularly liked his suggestion to warm up the language we use in instructions and syllabi.  I have been guilty of “cold impersonal language” in some of my syllabi instructions, with “don’ts” instead of “try this”.

Also, it was nice to see Jim note the Vanderbilt Center for Teaching website directed by Derek Bruff as a good web resource!  I have pointed out Derek’s guides to a number of my students!

So even if you already have Jim’s First Edition of Small Teaching, I highly recommend that you try his update!

And Jim … best of luck with your recent retirement!  As a retired faculty developer who teaches adjunct, I highly recommend it!