Last night, Jon Becker, with whom I am co-teaching the online Educational Technology and School Leadership course for Virginia Commonwealth University, used Wimba Classroom to have an extended conversation with Ben Grey, instructional technology coordinator for a school district in the northwest suburbs of Chicago.  Ben had heard Jon’s presentation at K12Online Conference on “Facilitating Technology Integration,” and had some questions.   Jon thought it might be interesting to have that conversation in an open forum, and to invite both our students and the community at large into the conversation.

We ended up having several students come in as well as several folks who joined from a Twitter link.  The conversation was lively, interesting, and marked with some fascinating points about the challenges we face with technology and instruction.  You can listen to an archived version here.  (Click Participant Join, put your first name in to enter, and then click Archive Start in the upper right to get the white board image to appear.)

If you do listen, one of the things you might find interesting is the backchannel conversation going on in the chat area while Jon and Ben were talking.  It was obvious that several people were engaged with the conversation, adding their “voice” without talking over the two presenters. 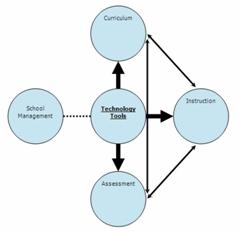 Some people had issues with the word “integration” as sort of an add-on to an already full plate.  Jon used a graphic here developed with one of his research students that suggested that there was quite a bit of literature regarding technology integration into curriculum, instruction, and assessment, but that little had been written about integration into school management.  I and several others saw this as a cultural issue, with leadership driving the culture in a school.

One aspect of the talk where I disagreed with Jon was in his work in West Virginia, where they have taken a systematic but slow approach to technology, limiting schools to a few vendors and standardizing technology across all schools.  While that makes sense for big-ticket items, I would suggest that in an age of ubiquitous web resources, a constrained approach continues a top-down and potentially teacher-centered approach to teaching and learning.  Still thinking this part through.

At the least, the conversation last night was interesting, fun, and engaging.  I am looking forward to being part of more conversations like this in the future.

One thought on “The Becker – Grey Conversation”