We have moved into our third week in the University of Edinburgh’s Coursera MOOC – E-Learning and Digital Cultures and have shifted from examining utopias and dystopias to an examination of what it means to be “human” in a digital age.

This is a timely examination for me, as it gave me a new lens through which to examine the blog posts of my own students in GRAD-602: Teaching, Learning and Technology.  More on that later.

The week began with quite a few of us uploading images to Flickr to represent our take on this massive course.  To date, there have been 328 uploads to the edcmooc Flickr site.  (WARNING – Time Suck) It is fascinating to see the various visual representations.  Mine pales in comparison to some of the really creative examples displayed…but it was a fun activity to start the week.

In this second block of the MOOC we are asked to question: ‘what does it mean to be human within a digital culture, and what does that mean for education?’.  As in previous weeks, we had a series of videos and articles to review.  We watched a couple of video advertisements here and here that suggested breaking out of technology and being human (though breaking free sometimes required technology).  World Builder involved the creation of a virtual world to help a comatose patient escape her situation, while Made of Meat was a cute look at humans from an alien (and robotic) perspective.  Steve Fuller wrapped up the videos with his TED Talk in Warwick on Humanity 2.0.

Fuller’s talk raised a couple of interesting themes for me.  First was the idea that “humanity” is an artificial construct.  He provided a history of the concept from ancient to medieval to modern times, noting that it is difficult to define what it is to be human.  Neil Badmington in his introduction to his book Posthumanism (2000) suggests that what makes us human is the capacity for rational thought…but will that definition need redefining as AI improves?

The second idea I pulled from Fuller’s talk was how many are reconceptualizing themselves in cyberspace – developing a second self.  This resonated with me.  Do I have a different “humanness” as bwatwood in Twitter or this blog or Facebook than I do as Britt Watwood in person?  Perhaps I do.  Is this a good thing or a bad thing?  Is my physical being enhanced or damaged by my virtual being…and would the answer to that question differ based on colleagues or my wife?

We read two articles on humanness and education.  Steve Kolowich in Inside Higher Education discussed “The Human Element.”  While noting the growing body of research about the effectiveness of elearning, he suggested that the issue of poor retention has much to do with the lack of human touch.  He noted a move by Douglas Hersh to move his college away from Blackboard towards Moodle, so that they could more easily incorporate video and audio components into their online courses.  Hersh suggests that engagement and audio-visual connections go hand-in-hand.  Increasing social presence through visuals could increase engagement, comfort, trust and ultimately retention in online studies.  Hersh’s 2009 dissertation studied the satisfaction and completion rates of a sample of 145 students in his “presence”-oriented learning environment compared to a similar sample taking their courses through a “traditional” LMS. He noted that “students feel more satisfied in their online courses when they feel engaged through human presence design”.

(Talk about human presence…as I type this, I am waiting for the noon Google Hangout session with our five professors….)

That said, I agree with Reggie Smith of the United States Distance Learning Association, who noted that adding flash did not guarantee results – it is the meaningful engagement of both the faculty and students that made the difference.

The other article was Lowell Monke’s “The Human Touch.”  Monke discussed the issues with having an uncritical faith in technology.  He focused on K-12, but suggested that exposing kids to computers early was similar to exposing them to church and Fourth of July parades – rituals to initiate them into a culture.  What I took from his article was that filling schools with technology did not address society’s problems as much as getting teachers and kids to use technology with a human purpose.

Which leads me back to the graduate class that Jeff Nugent, David McLeod and I are teaching this Spring.  Our 25 students are reflecting about the use of digital media in teaching each week – check out our class portal and please engage with our students!  I was struck how some of the posts and comments this week connected with this theme of humanness.

For instance, Laura in her blog post “A Rainbow Connection” noted that she was exploring “networked thinking and its role in the evolution of humanity.”  In the comments, Megan notes “I want to know the people I am “engaging” with.” Laura replies with ” Well, if we are to embark into online education, it’s not about replicating face-to-face but rather reproducing the magic of face-to-face.”

I am saying this with an open mind. I am not against learning and trying new things but at the same time I am not going to blindly believe that all technology is for good. I have changed my mind on the usage of facebook as a learning medium and do believe that some classes could benefit from twitter (such as the social sciences or ones where opinions are taken) but not necessarily biology. It would take far more than 140 characters to answer a question and personally it would be easier to do so via spoken word. That being said-youtube videos may be the connection that I would be more apt to (spoken word and ability to demonstrate a theory/process).

This same theme of the spoken word having more impact showed up in Caribou Cafe’s post “A Short List of Why I Will Not Be Using Twitter…“, with a desire to answer in person over typing out an answer.  For me, that is the human element coming through again.  Yet, these students are also grappling with their “other self” as Fuller suggested.

In “Digital Tools to Maintain a Digital Presence,” @evanibm notes “Twitter, Facebook, Tumbler, Google+ all have a place in our ‘individualistic yet craving for connection” or “loving our independent spaces yet craving to be part of a community”, type of lives.  We all need human contact to survive as healthy human beings.”  This view was countered by @magistra14 in the comments in “Twitter, Facebook, and Networks, Oh My!“, which noted “I’m not computer adverse. I repair and upgrade my hardware all the time. I’m also not people adverse…I am just an intensely private person and feel one needs my permission to know much about me, and no one has the right to demand more of me than I am willing to give.”  And @ScienceTeacher noted in the comments in “Web 140.0” that “Maybe there’s something to also showing our students that it’s a good thing to ‘get away’ from technology for a bit…but that’s just my personal opinion.”

So, thank you, #edcmooc team, for week 3 and this discussion of the human side of digital life! 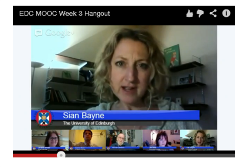 Speaking of the EDCMOOC team, another fun Google Hangout today.  You can watch it here.  Bud Deihl and I sat together to watch it, and amazingly (given the number of people worldwide viewing and engaging on Twitter, Jen Ross mentioned one of my tweets and two of Bud’s.  Talk about an instant human connection!  It has been fun watching this team engage with the learning community within this MOOC. One of the things I have appreciated is their own self-reflection on the process.  They are blogging together at Teaching E-Learning and Digital Cultures, and I have enjoyed their posts.  This is a grand experiment, and it is nice to follow their own perspectives, questions, and doubts!

Hamish noted some statistics for engagement this week.  The EDCMOOC had 42,874 people enroll, of which 7,392 were “active” last week (not sure how that was defined).  While that suggests around a 17% engagement, Jen noted that there were probably some who were lurking and learning, and that the team was okay with that.

Next week, we continue to explore the human side of digital culture.  Bud and I continued to talk long after we got off the session about our positive views of this course…and the fact that we see it as a course – and I would suggest those positive vibes come from the human side of this technological experiment.  As Hamish noted, “It’s a Happening!” (…and those of us who survived the Sixties knows what he means!) 🙂

4 thoughts on “EDCMOOC Week 3 and Being Human”