We are in our fourth week of the University of Edinburgh’s Coursera MOOC – E-Learning and Digital Cultures.  Last week, we explored what it meant to be human in a digital age.  This week, we focus on posthumanism…and its near twin, transhumanism.  Transhumanism is a movement that supports and affirms the desirability of using technology to eliminate aging and enhance human intelligence and physical capabilities.

As in past weeks, we started with a series of short videos.  Two of this week’s short videos dealt with robots attempting to be human.  Robbie told the story of a robot who became sentient and lived in space, but missed his human friends.  The course profs asked “if Robbie is capable of experiencing loneliness, happiness, faith and friendship, in what senses is he not human?”  It brought to mind the idea of a technological singularity, where improvements in digital intelligence lead to the emergence of a digital superintelligence.  Vernor Vinge first proposed the idea back in the 1980s, and it was further refined in Ray Kurzweil‘s book, The Singularity is Near.  Some welcome the coming emergence (which could happen in my lifetime), and some fear the impact on we humans.

The second clip was about Gumdrop, a robotic vacuum cleaner that dreamed of being an actress and dancing with Gene Kelly.  I grabbed a couple of screenshots of the clip and display them to the left.  Here is a robot that one could genuinely like.  She likes Charlie Chaplin but prefers Buster Keaton.  She wants to act but will not do hallucinogenics or nudity.  Her best skill is cleaning the rug.  Yet, if you close your eyes, you hear “life” in her words.  Again, a movie clip…not reality…but are we moving to a future where machines will be intelligent…and if so, will they have a soul?  Gumdrop seems to!

True Skin was a dark clip of a future world where people will look to enhance their bodies with robotic parts.  The ultimate insurance will be downloading your memories so that if you get killed, your memories can be uploaded into a new you.  Avatar Days looked at several people who played World of Warcraft, and how they continued to visualize themselves as their avatar self when interacting with the real world.  Both of these videos beg the question – which “you” – your physical self or your virtual self – is you?

The readings were interesting but pretty deep.  Nick Bostrom (2005) ‘Transhumanist values’ gave a good background on transhumanism, which sees human nature as a work in progress.  As I read this article, I thought about one of my favorite science fiction books, Cyborg, by Martin Caidin, which was turned into the TV show The Six Million Dollar Man.  As the show opens, we hear each week that “we have the technology…we can make him better.”  Bostrom notes that the history of economic and technological development with the concomitant growth of civilization is humanity’s most glorious achievement, freeing humans from illiteracy, disease, and famine.  Yet, he did not mention the collateral issues of population explosion, limited resources, and global warming.  Transhumanists assume that we will overcome these issues with technology.

Katherine Hayles, (2011) Wrestling with Transhumanism seemed to agree with my pushback on Bostrom’s optimism.  She did not see the coming developments as necessarily evil, but suggested that we should “take advantage of every available resource that will aid us in thinging through…the momentous changes in human life and culture that advanced technologies make possible.

Two readings had to do with education.  “System Upgrade: Realising the Vision for UK Education” (2012) EPSRC Technology Enhanced Learning Research Programme, suggested that education lags the rest of the world in taking advantage of technology to enhance learning.  It suggested twelve themes: 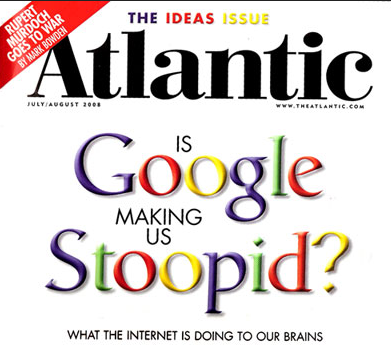 The other education article was Nicolas Carr’s piece from The Atlantic entitled “Is Google Making Us Stupid?” If the report from the UK above suggested that society harness the power of technology, Carr would suggest that technology is altering society…and not necessarily for the good.

I must admit that I have in the past dismissed Carr’s piece, but I have been reconsidering it this week in view of one of my graduate student’s blog post.  “I beseech ye in the bowels of Christ, think that ye may be mistaken” was the title of his post, taken from a 1650 letter by Oliver Cromwell to the Church of Scotland.  Goodman’s point in his post is that Cromwell suggested we can “correct biases in our thinking by considering the implications of opposing arguments.”  Good point, Robert!

So, is “being human” a flexible condition that society re-makes as it evolves?  Can we still “be human” in this digital age where everyone seems connected 24/7 with their smartphones?  I would say YES.  The past decade has certainly seen personal growth for me, and yet I believe that the fundamental values that make Britt Watwood who he is have not changed.  I embrace the possibilities, but I also question skeptically the assumptions that these new technologies bring us.  As we consider how new and emerging technologies COULD enhance teaching and learning, we must consider the implications of the opposing arguments – and make informed decisions.

Next week is the final week of this massive online course.  I have enjoyed the interactions with the professors and my fellow learners.  I still am considering the “digital artifact” that I must turn in by next Wednesday.  A Prezi would be fun and easy…but I really want to explore the possibilities of Scoop.It and see if it lends itself to being a digital artifact for learning.  We will see in the next post.

One thought on “EDCMOOC, Posthumanism and the Bowels of Christ”