An interesting second and third day here at the 19th Annual SLOAN Consortium International Conference on Online Learning.  The second day started early with an 8am keynote by Daphne Koller of Coursera, entitled “The Online Revolution: Learning without Limits.”

Her abstract for this talk made the following points: 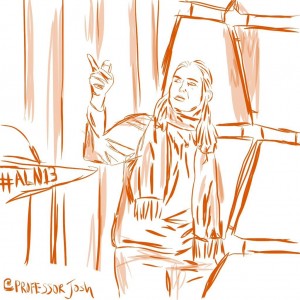 “We are at the cusp of a major transformation in higher education. In the past year, we have seen the advent of MOOCs – massively open online classes (MOOCs) – top-quality courses from the best universities offered for free. These courses exploit technology to provide a real course experience to students, including video content, interactive exercises with meaningful feedback, using both auto-grading and peer-grading, and rich peer-to-peer interaction around the course materials. We now see MOOCs from dozens of top universities, offering courses to millions of students from every country in the world. The courses start from bridge/gateway courses all the way through graduate courses, and span a range of topics including computer science, business, medicine, science, humanities, social sciences, and more. In this talk, I’ll report on this far-reaching experiment in education, including some examples and preliminary analytics. I’ll also discuss how this model can support a significant improvement in the learning experience for on-campus students, via blended learning, and provide unprecedented access to education to millions of students around the world.”

Given the hype around MOOCS and her early talks, I was a bit skeptical going in, but she delivered a solid keynote.  She seemed to emphasize that Coursera was in the platform business more than revolutionizing higher education…that Coursera was a good supplement filling a need that life-long learners had – given that 80% of the 5+ million Courserans already have a degree.  She noted that her own degree in computer science was dated, and so the types of courses offered by Coursera attracted (and completion demonstrated) those that wanted to update knowledge and skills.

She was quite proud of the reach of Coursera, noting not only numbers, partners, and courses, but that 14 students in Antarctica were currently enrolled in Coursera courses. #neat! She also made the point that when you reach massive scale, the cost of a course per student approaches zero. She demonstrated some neat applications of both machine grading and peer assessment in physics courses, chemistry labs, and humanities essays.  Of particular note (for me) was a study in which 1200 peer graded essays were also graded by TA’s, and the results strongly correlated.  I thought it was a leap to suggest that peer grading built community, but it is evident that sub-communities do form in Coursera courses. 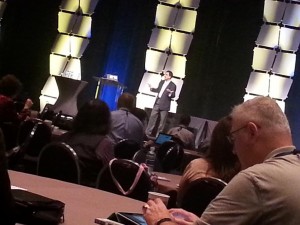 Contrasting her talk was the keynote on the third day, with Anant Agarwal (edX & MIT) discussing “Reinventing Education.” My colleague Yin Wah Kreher captured me madly tweeting during Anant’s talk!  His abstract noted:

“Digital technology has transformed countless areas of life from healthcare to workplace productivity to entertainment and publishing. But education hasn’t changed a whole lot. EdX is a MOOC (massive open online course) initiative that aspires to reinvent education through online learning. EdX’s mission is to dramatically increase access to education for students worldwide through MOOCs on our platform, while substantially enhancing campus education in both quality and efficiency through blended models that incorporate online elements created by the edX team.

This talk will provide an overview of MOOCs and edX, and share student stories that reveal how they are increasing access to education worldwide. The talk will also discuss where MOOC technologies are headed, and how they can enhance campus education. Finally, the talk will provide some recent research results that will allow us to improve education online and on campus, and discuss how MOOCs might evolve in the future.”

I found his talk much more nuanced and positive compared to Koller’s talk.  Rather than “selling” Coursera and pointing to huge (and impressive) numbers, Anant focused on the slower growth of edX and how lessons learned from decades of educational research was mindfully integrated with their approach.  Their first course was one of MIT’s hardest, requiring differential equations and complex problem solving.  They anticipated 2,000 signing up, but 155,000 signed up.  Over  26K did the first problem (indicator of true interest and not “tourist” status}, over 9K passed the midterm, nearly 7200 were certified at the end.  As Anant noted, the press focused on 95% not completing, but he focused on the fact that 7200 completers represented the potential output of 36 years of teaching circuits by the old model…something to be celebrated.  edX has continued to grow and now has nearly 100 courses.

As impressive as the courses and partner institutions are, Anant singled out how other institutions like San Jose State University are using edX MOOCs as “next generation textbooks.”  SJSU’s circuit course that used the MOOC for content and interactions saw a class failure rate drop from 41% to 9%.  Anant saw no difference to using MOOCs as next generation textbooks as he saw in the typical practice of most university courses using a textbook written by someone other than the teaching professor.  Huge implications for both publishing and teaching practice, but this concept really resonates with me!  As Rena Palloff tweeted:

#aln13 Using MOOCs in a blended flipped approach — makes sense to me. Feeling less skeptical but still need to focus on quality of content

Anant was very proud of the edX platform – OpenedX.  He described it as the GarageBand of education!  The active learning technology that he demonstrated was indeed – as he passionately noted – “very cool!”  He showed a Science of Cooking lab simulation that sizzled when the students cooked their steak.  Homework feedback gives big green checkmarks when work is correct, and green checkmarks have now become a meme on campus.

Overall, the twitter backchannel had some skeptics, but the majority saw this final keynote as a winner.  Well done, SLOAN-C!

Dropping back to Day 2, David McLeod and I did our presentation on “Liberating Students: Harnessing the Power of Open Student-Generated Content.” I have to say that the tech gods certainly smiled on me, as my presentation depended on first the use of Prezi, then playing the embedded YouTube with David’s portion of the presentation, and finally connecting with David at University of Oklahoma by Hangout for the Q&A portion…all in a 35 minute window.  Yet, it all worked perfectly.  I had set my laptop up on top of the podium facing the audience, and during the Q&A, David interacted with the audience like a rock star!

We described how we empowered students to create their own meaningful content outside the confines of an LMS, using WordPress, Netvibes, Protopage, and the creativity inherent in our students to make impacts in student lives…and in David’s case, the wider community.  Our Prezi is below, and I would recommend watching David’s pre-recorded 7 minutes within it, as all of the follow-up questions were directed at his super-innovative Project710 class.

I felt so bad for Lauren Cummins in the session following mine, as the tech gods that smiled on me frowned on her.  She presented on “Social Presence: Creating Online Learning Communities that Empower Student Learning.”   Two doors down from mine, yet she could not connect to her Prezi, and ended up using a Powerpoint hastily constructed the hour before…which was too large for the projection screen, so the words were cut off.  She gamefully pressed on and discussed ideas for creating community. Key was the social presence of both the students and the teacher.  Research has demonstrated that student perceptions of the presence of the teacher lead to higher student satisfaction with the online course…as well as potentially increasing student engagement.

Yesterday I noted that Bill Pelz was awarded a SLOAN Fellow.  At the second day luncheon, numerous other awards were distributed, including one to Kelvin Thompson and Baiyun Chen of University of Central Florida, for their work in faculty development.  I caught up with Kelvin afterwards, along with other BlendKit alums, to discuss BlendKit 2014, which Kelvin is currently developing.

I briefly attended a panel discussion by some of the thought leaders in higher education on “Leading the e-Learning Transformation in Higher Education.”  Most discussed the beginnings of elearning, but I left before I heard any transformative thought…in order to meet up with the BlendKit folks.  I will have to go back and listen to this one, as the make-up of the panel was impressive. 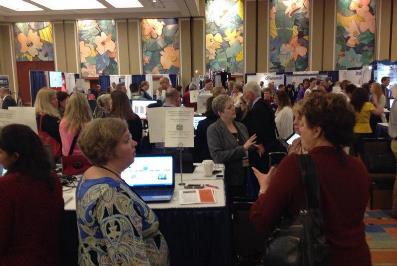 The poster session was lively.  Quite a few posters on a topic that bothers me – processes to proctor tests using video systems.  I know such processes are probably needed…but current state of technology (to me) seems to try and sell a false sense of security.  But as one faculty lamented…if I can just get my students to stop cutting and pasting during tests, that would be an improvement.  With all the amazing enhancements to assessment demonstrated during (in particular) Anant’s edX keynote, it seems that there are better ways to assess students – and use assessment formatively to enhance learning.

Overall, I thoroughly enjoyed three days of interaction and engagement with my colleagues at the SLOAN International Conference for Online Learning.  Looks like next year’s conference will be October 29-31 in Orlando.  I understand that the Sebastian Thrun costume was already trending on Twitter as must-wear next year!  I hope to be back.

One thought on “Sloan Online Conference Days Two and Three”