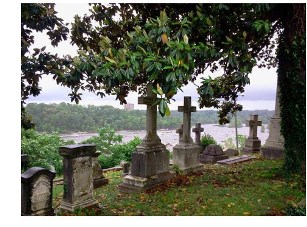 If you ever want a relaxing walk on a spring day, nothing beats wandering the 130 acres of Hollywood Cemetery near our campus of VCU.  Rolling hills, old trees, winding paths, and the resting place of U.S. Presidents James Monroe and John Tyler, as well as Confederate President Jeff Davis.

For those that track these things, it is a forty-minute walk from the VCU gym to President Monroe‘s tomb and back…but I am not pushing it…I am enjoying the walk, the scenery, and the glimpse back into Richmond history.  I do tend to pause a couple of minutes at the President’s burial site, as the view of the James River is excellent.

I find the inscriptions on tombstones fascinating as I wander.  There are cases of spouses who died within days of each other and other cases of (typically) wives outliving their husbands by fifty years.  Lots of Civil War graves and lots of Civil War veterans who lived into the 20th Century.

On some stones, you find where someone attempted to sum this person’s life with a single sentence.

Warren Berger, author of A More Beautiful Question, discussed this concept in his article “Find Your Passion With These 8 Thought-Provoking Questions.” Berger noted:

What is your sentence? is a question designed to help you distill purpose and passion to its essence by formulating a single sentence that sums up who you are and what, above all, you aim to achieve.

“…It’s a favorite question of To Sell is Human author Daniel Pink, who acknowledges in his book Drive that it can be traced back to the journalist and pioneering Congresswoman Clare Booth Luce. While visiting John F. Kennedy early in his presidency, Luce expressed concern that Kennedy might be in danger of trying to do too much, thereby losing focus. She told him “a great man is a sentence”–meaning that a leader with a clear and strong purpose could be summed up in a single line (e.g., “Abraham Lincoln preserved the union and freed the slaves.”).

Pink believes this concept can be useful to anyone, not just presidents. Your sentence might be, “He raised four kids who became happy, healthy adults,” or “She invented a device that made people’s lives easier.” If your sentence is a goal not yet achieved, then you also must ask: How might I begin to live up to my own sentence?”

So my 30-Day Challenge question for today (…and we are nearing the end of the challenge!):

Day 29 – What would I want listed on my teaching tombstone? 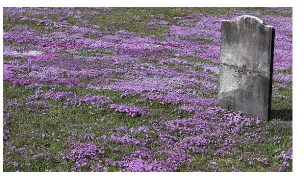 Tom Peters in some of his presentations used to use this tombstone metaphor.

He suggested that we would not see on Winston Churchill’s tomb:

“He brought World War Two in on budget“

…or on Ghandi’s tomb:

I would suggest that it should not be…

“Transformed the lives of his/her students” …

“Created a thirst for more learning” …

“The most successful people are obsessed with solving an important problem, something that matters to them. They remind me of a dog chasing a tennis ball.” To increase your chances of happiness and success, Houston said, you must “find your tennis ball–the thing that pulls you.”

So maybe my tombstone would read simply:

“He found his tennis ball“

One thought on “30-Day Challenge – Day 29 – Your Teaching Tombstone”