Jeff Nugent, Joyce Kincannon and I sat down this morning to record a podcast that riffed off of our GRAD-602 class last night.  We had continued our exploration of digital practices, focusing on communication and collaboration. We started last week with a Shirky quote last week on the largest increase in expressive capacity ever.  Another quote that inspires us and aligned with last night:

“In conversation we think out loud together, trying to understand. … The Web releases thoughts before they’re ready so we can work on them together. And in those conversations we hear multiple understandings of the world, for conversation thrives on difference. ” (David Weinberger, Everything is Miscellaneous (2007, p. 203) 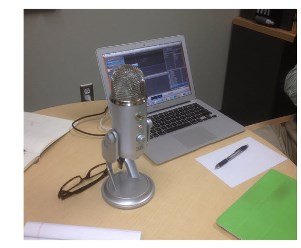 In that spirit, we looked at practices associated with communication, such as email (parodied as the breakthrough communication that opened the professor’s door…but continues to be primarily a broadcast mechanism), video conferencing, and networked communications such as Twitter, LinkedIn, or Facebook.We then shifted to digital collaboration, noting the overlap in many of these processes / practices we have already covered.  One example we showed was Mike Wesch’s class wiki, tying in student-generated content with tweets and blog posts and empowering students to co-construct their course.

We were trying to move our students beyond new ways to do old things.  Mike Wesch‘s open class offered up new ways to do new things…such as his World Simulation.  Another example of digital imagination is Wikipedia.  At the same time that Microsoft was spending massive dollars to create Encarta – a CD based encyclopedia produced by known experts, Jimmy Wales and Larry Sanger launched Wikipedia, letting anyone collaboratively write and share articles.  There are now 4.4 million articles in the English version alone … though Wikipedia is now in 287 languages.  Globally, it is now the fifth most heavily used website.  This departure from “expert-driven” style took digital imagination.

This morning, we discussed the “So What?” question.  What makes networked learning compelling?  Take a listen…and add your thoughts using the comment feature below.