Jeff Nugent, Bud Deihl and I were having coffee this morning and discussing our journey this past year in adopting new technologies. All three of us have gone through some interesting and remarkably similar phases in our adoption of social bookmarking, blogs, and lately – Twitter. In all three cases, we gained an initial understanding of the tool but pushed back and did not adopt it immediately. We then re-examined it and through mutual support, jumped back in, finally gaining personal insight and moving to internalization of the technology as “ours.”

There are some interesting parallels to our adoption curve and a leadership model first developed by Paul Hersey and Ken Blanchard: Situational Leadership. While some fault SL as not academically rigorous, it has nonetheless remained a stable of leadership courses (including mine) for the simple reason that it makes sense and works. 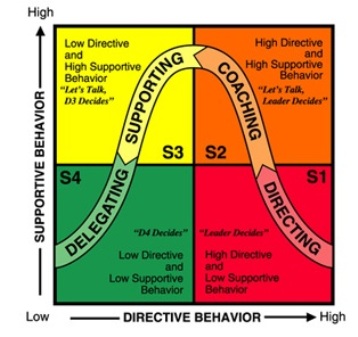 Hersey and Blanchard noted that most workers start as enthusiastic but non-competent practitioners. They are willing, so they need little supportive behavior, but they lack skills, so they need lots of direction. Blanchard called this the S1 Directing phase. As the workers’ skills grew, their motivation may wane, so they need added support and stroking. This is Blanchard’s S2 Coaching phase. On achieving mastery, the workers may not be confident, so support remains high as directing behaviors are backed off – Blanchard’s S3 Supporting phase. Finally, they can run on their own, and on reaching Blanchard’s S4 Delegating phase, little support or direction is needed.

The model is situational in that one might reach S4 in one area but need S1 guidance on assuming a new task. It appeared to me that Jeff, Bud and I all went through the S1-S2-S3-S4 cycles three times this year as we examined, learned and adopted three different technologies for personal use. With delicious last year, blogging this fall, and Twitter in the last month, I was interested and willing but not competent. Jeff provided the necessary direction to help me get started. We three formed our own support group and reinforced each other’s steps and mis-steps as we gained familiarity and confidence with [del.icio.us] [word-press and edublogs] [Twitter and twhirl]. As our abilities grew, less direction was needed and we continued to support each other. Finally – at least for delicious and blogging – little support or direction was needed, as these had become internalized and part of our normal routine. We are still in the Coaching/Supporting phases on Twitter!

The lesson for me is that adoption is not a quick process, but rather a continuum of activities, calling for both directing behaviors and supporting behaviors. I am fortunate to have great colleagues that provide that support on a daily basis!

3 thoughts on “The Situational Adoption Curve”