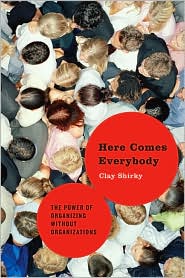 I have started reading Clay Shirky’s book Here Comes Everybody this weekend. I am enjoying it, but my mind is buzzing with implications. He discusses how, in the same way that the printing press opened people’s minds and the telephone increased two-way communication, so has the new web applications altered how groups form and interact. He had great stories such as how one website helped a woman recover a stolen cellphone when the NYPD was not interested in pursuing the case, or how Flickr now can develop groups around local parade photos (or national disasters) without anyone being in charge. One had only to watch Twitter early this morning to see Sue Tapp, Jenny Luca, Vicki Davis and Sue Waters get together on the fly through Twitter, shift to Elluminate, and end up creating a social networking site in Google Groups:

The power of social media to rapidly pull like-minded people together for collective action without market forces or profit motives is mind-boggling!

Yet, another quote that John Krutch brought to my attention through Twitter this morning seems relevant. John was quoting something George Siemens blogged yesterday, and I am taking it out context, and yet, am not….

“…technology cuts both ways. It opens and it closes. It frees and it imprisons…”

Technology cuts both ways. It opens and it closes. It frees and it imprisons. Wow! It captures some recent feeling I have had at the personal level. I have embraced social media and it has certainly opened new avenues of knowledge and communication, but has also tied up a lot of time and energy, leaving me at times feeling trapped and imprisoned by this technology.

Shirky raises some interesting questions regarding this new empowering technology…question similar to those asked by George Siemens. I feel connected with an amazing worldwide collection of amazing “friends,” yet see fewer and fewer connections with two of my office mates who work down the hall. Our office is splitting into Twitters and non-Twitters (and both sides proud of the fact). I have joined new groups fighting technologically relevant issues worldwide, and joining less with members of my local team. This technology is cutting both ways, it is opening some doors and closing others, it is creating the “haves” and the “have-nots.” This is an unsettling time and will work itself out…but I hope to feel freer and not imprisoned as time passes.

Anyone else feeling this angst???

4 thoughts on “The Double-Edged Sword”