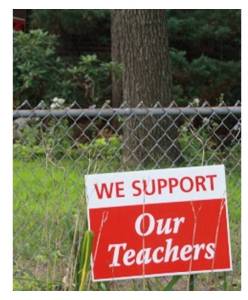 Darren Draper had an interesting and thought provoking post Monday, which is no surprise from Darren.  In “No Teacher Left Behind?,” Darren began by noting that he believed the positive message David Truss had posted in “Who Are the People In Your Neighborhood?“, but then asked if:

Shifting gears to a higher plane:

I guess what I’m really wondering is this:

He DID note that he was tired as he posted these questions!  🙂

I think many of us that work with faculty wonder some times if it is okay to simply leave some teachers behind.  However, let me suggest an alternative view.  I have been excited this week as my online class of graduate students – all older K-12 teachers and many self-labeled technologically-challenged, began to submit their projects on Web 2.0 tools.  My 21 students have each taken a different tool, explored it, and then begun to share their exploration with their fellow students in ways that reinforce Web 2.0.  So I am starting to see teachers who had never ventured beyond Powerpoint suddenly using some of the tools CogDog lists in his 50+ Ways to Tell a Story.  I am finding new tools that I have never seen before, such as RockYou.Com, which allows someone who has never published multimedia before to mix photos, effects, and music in compelling ways.  SlideShare, Camtasia and Jing are being used.

It is early yet, and only a quarter of my students have posted so far, but I am excited by what I have seen so far.  It reminds me that it is worth the time to get teachers excited about using 21st Century skills!

4 thoughts on “No Teacher Left Behind”