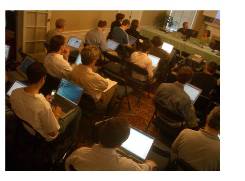 Laptops to many university students today are the equivalent of the spiral notebooks of my generation – a necessary part of attending college.  Yet, students find mixed reactions when they fire up their laptop in a classroom.  Friday, I had the opportunity to facilitate a brown bag discussion with a group of faculty from diverse disciplines regarding student use of laptops in university courses.

To guide the discussion, I created a wiki and placed some vignettes from around the country that illustrated both the successful use of laptops and the banning of laptops in classes.  I worked with Jeff Nugent to craft this wiki so that we took a neutral position going in – presenting two sides of the laptop coin without favoring either.

But in some classes, students will miss out if they leave their laptop in the dorm.  Christian Jernstedt, a psychology professor at Dartmouth College in Hanover, New Hampshire, relies on Internet-connected laptops to keep his lectures hopping along.

He pioneered a system – originally with hand-held computers – that uses the college’s wireless network to pose interactive questions to the entire class. Everyone answers on his or her laptop. The replies show up on an overhead display and prompt class discussion.  “The goal is to engage the student,” Jernstedt says.

He asks questions that force students to think – not regurgitate memorized facts – and sometimes make a personal connection with the course material.  For example, when Jernstedt starts a unit on what stress does to the brain, he asks the students how frequently they feel stress in their lives.  “Most students are surprised to see how many other people feel like they do,” he says. “And so that sort of question is, in a sense, a hook to what’s coming.”

And hooked students, he adds, are not tempted to toggle over to their Facebook profile or check e-mail.  “You don’t have to think at all about what else they’re doing because they’re engaged in what’s going on,” he says.

Most people are familiar with the portability of laptop computers. But what does it mean to attend class in a “laptop classroom”? At the University of Iowa College of Engineering, it means that all of the students in a 72-student computer programming class have their own laptop computers. It also means that students are more focused and involved in their studies than ever before, thanks to a first-of-its kind use of technology in the classroom.

“The students are writing more computer programs in class and learning how to use the software right in class,” says Gary Christensen, associate professor of electrical and computer engineering. “I hardly have anyone coming to me for help during my office hours anymore because we answer most questions in class… An exciting thing about the workshop was that there were very demanding computational, storage, networking and visualization requirements to present the material and the laptops and the new classroom networking were up to the challenge,” he says.

Christensen says the notion of the classroom was developed out of his classroom observations and in response to recommendations from his previous students.The teaching environment is far different from computer programming classrooms of the past in which students passively watched an overhead projection of a lecture. Now the students and professor actively engage in discussions of programming techniques while simultaneously writing small programs on their individual computers.

“The students were here about 15 minutes before I was today!” says Christensen at the conclusion of one recent class. “You don’t usually see that in any class.” And then he offers a clue to student enthusiasm: “I’m trying to make them think first, not just sit down and type a program.”

Why I Ban Laptops In My Classroom

Some years back, our law school, like many universities, high schools, and even grade schools around the country, wired its classrooms with Internet hookups. It’s the way of the future, I was told. Now we have a wireless campus, and incoming students are required to have laptops. So my first-year students are more than a bit surprised when I tell them that laptops are banned from my classroom.

As I explained in an editorial about this for the Washington Post last year,I ban laptops for two reasons. Note-taking on a laptop encourages verbatim transcription. The note-taker tends to go into stenographic mode and no longer processes information in a way that is conducive to the give-and-take of classroom discussion. Because taking notes the old-fashioned way, by hand is so much slower, the student actually has to listen, think and prioritize the most important themes. Of course, if one’s idea of a lecture is a process by which the notes of the teacher get transferred to the notes of the student without passing through the brain of either, then laptops may be the perfect transcribing tools. But if the goal is an interactive classroom, I find that laptops just get in the way.

Laptops also create a temptation to the many other things one can do there — surf the Web, check e-mail, shop for shoes, play solitaire, or instant-message friends. That’s not only distracting to the student who is checking baseballscores and statistics but for all those who see him and many others doing something besides being involved in class. It also takes the student out of the classroom discussion, which itself has collective costs for the learning environment as a whole. (In deference to the modern era, I permit two volunteers each class to use laptops to take notes that are then made available to all students.)

Taking the Classroom Out of the Internet Age

The University of Chicago Law School has removed Internet access in most of its classrooms because of a growing problem of students surfing the Web on laptops during lectures.

“Every teacher underestimates the amount of Internet surfing going on” in his or her classroom, U of C law Dean Saul Levmore said in an interview Thursday. “Whenever faculty would visit other faculty members’ classes, they would come to me and say, `You just won’t believe it. It’s astounding what happened.’ “But they never believe it’s going on in their own class,” he said.

In a recent e-mail message to students and faculty, Levmore wrote, “Remarkably, [Internet] usage appears to be contagious if not epidemic” during law classes. “Several observers have reported that one student will visit a gossip site or shop for shoes and within 20 minutes, an entire row is shoe shopping. “Half the time a student is called on, the question needs to be repeated,” Levmore added.

Law students’ use of laptops to surf the Web, read and write e-mail and play computer games during class has brought changes at a number of schools, including Harvard, Yale and Stanford. Stanford now has a posted policy that laptops and wireless Internet access may be used only for purposes relevant to the class and “not unreasonably distracting to fellow students.” And Stanford says “Harvard Law and Business [schools] have resorted to shutting down their wired connectivity in classrooms to address such problems” and Yale has considered it.

In his e-mailed announcement Wednesday, Levmore said that U of C law has removed Internet access in most classrooms “in order to ensure the value of the classroom experience.”

Faculty present represented the mixed views regarding student use of laptops in classes.  Some were strong advocates and were looking for more ways to engage students.  Others were concerned about the temptations laptops offer to get off message, and one math professor outright banned all technology (including calculators) from his class.

Concerns revolved around issues of focus and engagement with learning if students were also Facebooking, IM’ing, or emailing during class.  Because other students can see screens, one student’s off-task viewing coiuld be disruptive to other students sitting in view of this laptop.  While students have zoned out in decades past, some felt that the wireless laptop offers greater temptations to do so now.  The key one faculty noted is engagement.  If students are engaged in the class and are co-opted into the learning process, the laptop becomes a powerful ally for learning.

The discussion was rich as faculty reviewed opportunities associated with laptops.  One faculty designates a student as a Google jockey to fact check items that come up in class.  Jon Becker discussed using CoverItLive so that students can collaboratively develop class notes on sessions.  (I found out later that Jon had actually been live blogging our brown bag with CoverItLive).   He also noted the potential associated with backchanneling comments and questions during a session.  (Ira Socol had an interesting blog post recently that discussed a similar use in his classroom.)

I doubt that any minds were changed yesterday, yet I do think each faculty left with the realization that one cannot take a laissez-faire approach to the use of laptops.  One needs to consider the context under which the use of a laptop can enhance learning.  One then needs to actively build that use into the curriculum and look for opportunities to model that process to students.  At the same time, there are occasions in some teaching moments when laptops can become a distraction, so classroom management rules are needed to provide for “lid down” moments in the class.  As in many scenarios, communicating one’s expectations can lead to improved teaching and learning involving student use of laptops.

I would be interested in your thoughts and comments.  Do you have policies for your classes?  Do you have innovative ways of tapping into the potential laptops afford?  I would love to learn more!

8 thoughts on “Students and Laptops in the Classroom”