A few weeks ago, Tom Peters used some recently deposited bear scat to illustrate his point about the current economic times:

A little graphic but it got Tom’s point across.  Sometimes crap is what crap is.  I was thinking about this today when I found out that Edublogs has been adding advertisements in a stealth mode to mine and other Edublogs that they host.

Two things I should state up front.  First, I do not pay for my blog.  One of the things that attracted me to Edublogs was their premise that they would host a blog for educators at no charge.  In fact, if you go to Edublogs, you see the notice at right which tells you to sign up and get started for free.  And I did almost one year ago.  I have thoroughly enjoyed this blog and the connections it has afforded.

Second, I believe in the power of blogging and the networking that occurs through blogs.  I have learned much and am indebted to Sue Waters (who is paid by Edublogs) for the superb “how-to” blog she provides at The Edublogger.  The edublogging community has definitely benefited from the hosting and support provided by Edublogs.Org.

So I was caught off guard this morning when Jim Groom tweeted this to Jeff Nugent: 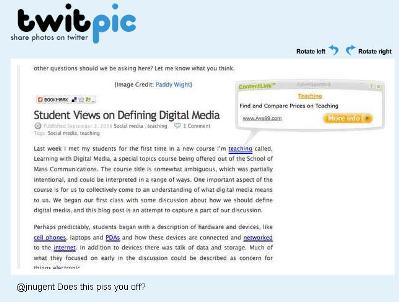 I checked my own blog and there were no advertisements.  But then I cleared all Private Data including log in data from my Firefox browser and then went back in to my blog – in a manner similar to one of my students Goggling me and then checking out my blog.  Here is what I found: 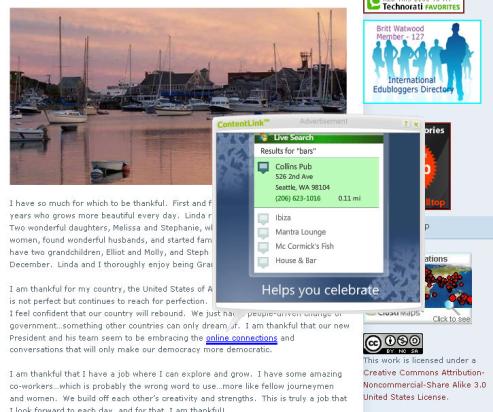 Very interesting!  A blog post in which I discuss things I am thankful for brings up an ad for finding the right bar! That definitely sends a signal about who I am!!!

Of course, I played no part in selecting this ad or placing it in my post.  Those familiar with how blogs work might recognize this for a pop-up ad and not part of my content.  I would wager, however, that the vast majority of people who might read my blog are not as discerning, and since my blogs are full of links, they would not differentiate between the links “Britt” inserts and the links “Edublogs” inserts.  It is Britt’s blog and therefore representative of Britt – or worse, of the Center for Teaching Excellence where I work (my disclaimer notwithstanding).

I have several other examples, but I think the one above makes the point.  Having discovered this, I then began researching it.  If one searches the Edublogs Forum, one will find a forum on ads.  Apparently, the administrators at Edublogs began looking at ways to bring in revenue about 9 months ago, and came up with a process to embed ads that would only show to those not logged in.  If one did not keep up with the legal Terms of Service nor dutifully read their blog forum, one would not be aware of this.  The administrators stated it would be too hard to email all users with this policy.

It also appears that several users have discovered this in the past week and some are pulling their blogs off Edublogs in protest.  The latest post noted that the administrators were re-examining the policy and would email all users soon.

I am concerned enough to start looking around at other options for my blog.  I still feel that the spirit of the Edublogs community is a worthy one, but that spirit has been soiled by the manner in which ads were added without consent to the blogs of professors, teachers, and students.  I also think that it is worth paying a fee to have no ads, and would suggest to Edublogs that they look at the process Jott used to move from a free service to a paid service, including transparency in the process.

How about those of you who also use Edublogs?  Is this an ethical issue of sufficient weight that you would consider pulling your blog?  I would be interested in your thoughts.