I thoroughly enjoyed this second day at Blackboard World 2009.

Bud Deihl and I presented this morning on weaving the social web into learning while still using the Blackboard learning management system for the things for which it was good.  We used the class that Jon Becker and I taught last spring as an example.  In that class, Delicious was used to share resources found by students.  Wikispaces was used for collaboration and sharing.  And Wimba Classroom was used to bring in both guest speakers and total strangers who connected with us through Twitter.  Blackboard allowed for effective class management of rosters, grades, and safe discussions in the discussion board.  The web allowed for connections with other professionals involved in educational technology in K-12 settings.  It was not an either-or situation but a both-and.

We had around 130-140 people attend our session, and the dialogue was excellent.  Several reinforced our notion that social skills are a necessary literacy for the 21st Century.  When one person remarked that these skills were needed for 21st Century jobs, I reminded all that we have been in the 21st Century for nine years now!  I pointed them to danah boyd’s post from yesterday that nicely summarized some of our frustrations with faculty negativity about using social connections in education.

Needless to say, Bud and I thoroughly enjoyed both our presentation and the rich discussion it generated.

During the day, I attended several other sessions.  Connie Weber of Blackboard discussed the new Bb Grade Center, which has a quite different look and feel from earlier versions of Bb Gradebook.  I liked some features (locking columns, sorting features, special views) but saw other features as problematic.  Where you used to be able to simply click on a student’s name and see all grades associated with that student, you will now have to create a special report to achieve what one mouse-click did in the past.  As with any “progress”, we will adapt and learn to live with it, but faculty traditionally do not deal well with change…and this is quite a radical change!

I was disappointed with the Birds of a Feather session for Faculty Developers.  It turned out that no one was designated to moderate this session, and so after ten minutes of quiet, we all started sharing some practices, but it was not a session in which I gained much.

I then attended a session entitled “Social Networking, Text Messaging, and Web Technologies to Support Web-Based Teaching and Learning.  From the title, I thought the key words were “teaching and learning,” but it turned out the key word was “support” – in that this was a session about Help Desks targeted at other Help Desks.  Interesting use of social media that I sent back to VCU’s support staff via Yammer…but not what I expected.

The final session of the day was our own Sheila Chandler’s discussion of how Virginia Commonwealth University manages its Blackboard environment to ensure 24/7 availability of a system that is now considered mission critical.  I can only add my thanks for our support team who do an excellent job!

The day ended with a Client Appreciation Party.  The look-alike Barack Obama and George W. Bush had to be seen to be appreciated.  As “W” told Bud, he liked his name because he did not need to come up with a nickname for him!  I did complement “W” and told him I voted for him 3 times, and he asked “Which election?!?”  Good food, good humor, good music, and me with a bum knee!  Oh, well!  The conference wraps up tomorrow.  Overall, it has been a very valuable experience. 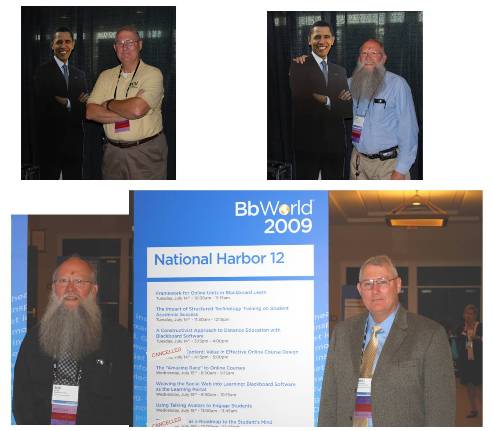