It has been a while since I blogged, partly due to semester start-up and partly due to spending a lot of time in Twitter and Facebook.  However, yesterday we did something rather neat that takes more than 140 characters to share. 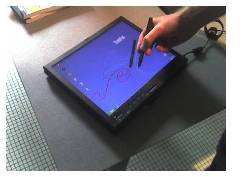 There has been a lot of buzz this week about the iPad and tablet PC‘s.  Tablets have been around for  awhile and they give you the ability to use s tyllus for drawing or inking on documents and virtual whiteboards.  Here at VCU, Jeff Nugent has run a faculty development project for several years that equips faculty participants with Lenova ThinkPads to use instructionally.  These cohorts meet periodically to share lessons learned and look for innovative ways of using tablets in the classroom.  Giving faculty the ability to draw out and explain their computations real time is a big plus for tablets.  However, in most teaching situations, the faculty member is shackled to the podium, in that we have not found a good system that allows for wireless projection from the tablet to the older mounted LCD projectors in the classrooms.

Jeff had a brainstorm earlier this week, and together, we tested it – and it worked!

We used our licensed web conferencing system – Wimba Classroom – to act as a wireless projector.  As shown below, we added a fictitious student account to our Blackboard class.  We then logged into Blackboard on the podium computer as this student, and then entered the Wimba room we had set up.  On the tablet, we logged in as the instructor, entered the Wimba room and then shifted to sharing the desktop of the tablet.  The podium computer then projected what we had showing on our tablet. 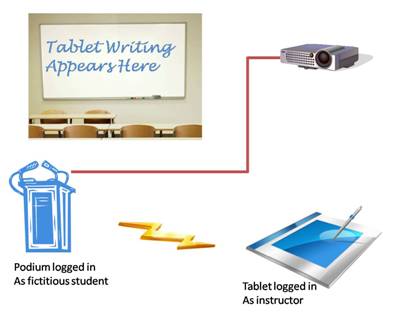 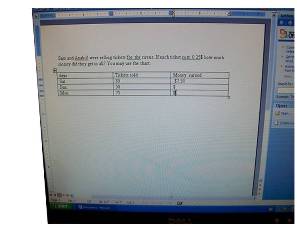 This gave us the ability to freely move around the room, hand off the tablet to students and let them work problems from their desks, and even capture the screen as it unfolded using the archive feature of Wimba.  In computational classes like math, physics, or other sciences, your students can now become more actively engaged with lessons.

None of us likes being tied to a podium, so this workaround opens up lots of possibilities in our classroom teaching!  Our current cohort of tablet users were excited about the opportunities this affords them.