On Thursday afternoons for the past few weeks, I have been joining Jeff Nugent‘s graduate class in VCU‘s Preparing Future Faculty program.  This class of twenty-four bright masters and doctoral students probe concepts at the intersection of teaching, learning and technology, and through the process, keep a learning journal in the form of a blog.  These are aggregated here and make for interesting reading.

This past Thursday, Jeff ran them through a class activity in which they unpacked their concepts of a learning management system like Blackboard (the one with which they are most familiar) in terms of what were the advantages and disadvantages of using a LMS from a student’s perspective and from a faculty member’s perspective.  Several things emerged.  First, when focusing on student perspectives, they tended to align with the findings of the ECAR Study of Undergraduate Students and Information Technology.  Students like the convenience and access that a LMS gives them.  They also saw it as a good communication link to faculty and students in their class.  Their perspectives of how faculty use a LMS also mirrored the ECAR study, in that they saw faculty use as unsophisticated.  I was actually a little surprised at how many reported that faculty they worked with continued to use the out-dated Digital Dropbox in Blackboard rather than the more efficient Assignment Manager. 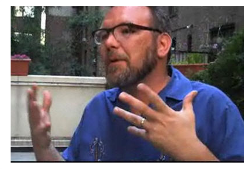 The bulk of the afternoon class was devoted to Jim Groom, who came in to our class via Google Video Chat (which worked quite well).  The Right Reverend Jim, an instructional technologist from the University of Mary Washington, is well known in the blogosphere for taking on corporate learning management systems, and his conversation with our students was not disappointing.  He spent over an hour discussing the role of the LMS in teaching and learning and gave all of us lots of fodder to chew on!  Jeff Nugent did a great job capturing key points in his post “[Un]packing the Learning Management System.”  As Jeff noted:

I often take for granted that the web is a space for learning, but am reminded that this is not always broadly shared. Jim helped me to see that this remains a central part of the conversation, and is important to continually address when the LMS is often the defining space for the intersection of formal coursework and the web.

Jim launched his discussion by noting that the class had three reading assignments.  The first was Coates, James, and Baldwin’s “A Critical Examination of the Effects of Learning Management Systems on University Teaching and Learning.”  The second was Lisa Lane’s “Insidious Pedagogy: How Course Management Systems Impact Teaching.”  The third was Carmean and Haefer’s “Mind Over Matter: Transforming Course Management Systems into Effective Learning Environments.”  Jim noted that the first was behind a pay-to-read system, the second was widely available, and the third was published under Creative Commons.  This illustrated in a microcosm the issues of the LMS and the range in which access to instruction occurs in higher education.

To Jim, the real issue with using an LMS was an issue of power.  Locking student work behind the walls of a LMS, and more importantly, cutting off access to their own intellectual work in the course at semester’s end, suggested to Jim that one did not respect student work.  The model he has proposed at UMW Blogs is to make student work open and transparent over the student’s life at Mary Washington, and to give them ownership of their own work.  They have made the shift in giving access to a course to giving access to individuals – a much more learning-centered approach. 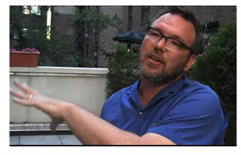 Jim took head on the fear that allowing students to work outside the sanctioned LMS would potentially lead to legal issues.  He said that people are quick to note very rare instances of problems, but that few have addressed the benefits of working in an open environment.  He told several stories of cases in which UMW students became aware of their worldwide audience.  For instance, a class that had students writing poetry and telling their poems in podcasts in their blogs discovered that students in India were using their poems to learn English.  Jim felt that UMW was doing a better job than typical universities of helping students discover and manage their digital identity.

At almost the same instance that Jim was discussing this, Lisa Lane was blogging about the same subject.  In “FERPA Schmerpa, the LMS and open ed,” Lisa stated:

To me, posting/presenting and commenting is open work and open education — for my online classes, this process is behind a wall right  now only because I’m in a Learning Management System (Moodle), but it shouldn’t be. If I instead used a Ning, I could set it to be closed, “just for students”, but I’d like everyone to see the work. This is where I’m heading with online teaching — open courses. Learning should be open — if it is, people will be less afraid to try out their ideas, absorb and respond to criticism. They will also be part of a larger community. That’s how the web works, and these are important skills for my students’ careers. 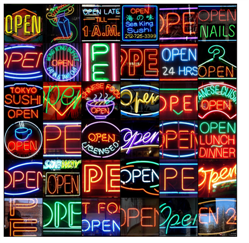 Important skills indeed.  Jeff, Jim and Lisa are moving the conversation forward regarding open learning.  This summer, I will be working with Jon Becker to update our Educational Technology for School Leaders course.  We are still working on the vehicle (blogs versus Ning), but we are moving towards a more open course.  School leaders need to develop these digital skills themselves as they work with the next generation of students rising through K-12.  Those of us in faculty development should continue to both model and promote  these learning centered practices so that when these rising K-12 students arrive at college, they do not find themselves back in the Dark Ages.

We will continue to use the LMS for the management things for which it is best suited – roster management, grades, and private conversations.  Our use of blogs or Ning will be integrated into Blackboard, similar to the way Susan Gautsch described in her webinar on Pepperdine’s GLEAN – Graziadio’s Learning Environment and Network, or Jon Mott’s Open Learning Network.

One of Jeff’s students had an amusing comment that illustrates our challenge perfectly.  She said that one of the department’s faculty had walked in on a conversation she and others were having about whether to use Blackboard or not.  The professor immediately stated that he thought the use of this was old-fashioned…he much preferred the whiteboard! 🙂

Learning can certainly occur whether one uses a blackboard, a whiteboard, or a web mediated tool.  Increasingly, the web is becoming more integrated with teaching and learning, and the central question becomes whether the interaction on the web should occur behind closed walls or on the open web.  Jim made a great case Thursday night for freeing student content, giving students responsibility for their own digital identity, and in the process, creating fantastic learning opportunities.

I would be interested in what others think about deciding what is open and what is closed.  Am I overstating this question as an issue of power?

As Jeff noted in his post, these are questions we each should make when we choose to teach in closed systems on the web.

6 thoughts on “Shift in Access Equals Shift in Power”