Over the weekend, I started a little project that will last a LOOOONNNNGGGG time.  My daughters have given me a scanner so that I might digitally scan some of the 2400+ 35mm slides that are sitting in storage up in the attic.  Works great, though it takes 8 minutes to do 4 slides.  (You do the math…) 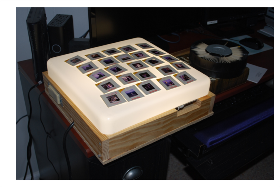 So to get started, I went shopping for something I used to have – a lightbox to sort slides.  No one locally had them anymore, and those online cost over $100.  But a little research on the web and $30 of materials from Lowes, and I built my own in a couple of hours.

It works great, I have started sorting through and digitally scanning slides that are 40 years old…and I did it myself, but with ideas sparked through the web.

It is symptomatic of learning today.  We live in a DIY world.  If we are curious, we can find the answer to almost anything by digging into the internet.

And is that not what we want our students to do?  Gardner Campbell has talked about the need for students to learn at the meta level, and he stated this weekend, “…teaching must refocus from teaching the explicit to teaching strategies for recognizing and accessing tacit knowledge.”  I never took a course in lightbox construction, but I had the skills to knock it out when I need it. 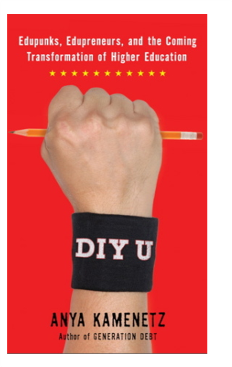 So I believe in DIY.  Given that, I was disappointed in Anya Kamenetz‘s new book, DIY U.

This was my vacation read, and as such, it had to compete with three grandkids, but after a day with 2 to 3 year olds, Grandpa was ready for a book.  This book is on a topic about which I feel pretty strongly.  Anya quoted many in my personal learning network, such as Jim Groom, George Siemens, Laura Blankenship, and Gardner Campbell.  And she writes for one of my favorite magazines, FastCompany.  So it should have been a hit.

But it left me feeling like she had hit a base hit instead of a home run.   In many ways, Anya has jumped on the open source / open access bandwagon others have blogged about for the past few years, and to her credit, she turned a profit doing so (at least, I assume that is what “bestseller” means…).

CogDog gave a good review of his impressions of the book in his post, “The Gaping M Shaped Void for DIY Education;” impressions that mirrored mine.  He asks two good questions:

The motivation question is spot on.  Anya seems to equate success with salary, and therefore writes off the potential of higher education to contribute to the democratization of society (though she does lament a bit about the need for such).  In the end, she suggests that formal higher education is really only for ten percent of people, while the other ninety percent would be well served using informal learning networks and just-in-time training (page 136).

I am not sure where she gets her figures, because the latest Chronicle of Higher Education Almanac shows that nearly 28% of Americans complete a four-year degree or more (though granted, that means 70% do not).  Nearly a quarter of Americans also complete some college or complete a two-year degree.  I studied community colleges during my doctoral studies and spent ten years working in community colleges, so I do not denigrate these colleges as less than four-year institutions.  They have a mission that differs from research universities, but both are needed in this country to both provide access to learning and create the new learning that drives our country.  So currently, a little more than one-third of Americans complete a two-year or better degree, and better than half have some college (and for many community college students, that meant they obtained enough skill training to get a job without necessarily completing the degree).

Anya is correct that current society expects a higher yield.  College is listed by politicians across the land as the right of all Americans.  She just does a lack luster job of describing how this country might generate that increased yield.  She is the latest in a long list of authors who suggest that disaggregating learning from credentialing is the answer, with technology as the means by which this disaggregation will occur.

For other views on the book, check out Jon Becker’s curation of reviews in this Google Doc.

Yet with all that was wrong with her book, Chapter 7 – Resource Guide – contains a lot of good information.  She lists some pretty good web resources for students to use to help align their studies with their interests.  She provides a rich list of open educational resources.  Given the strong economic flavor of her book, she gives future students good tips on keeping their education affordable.  Finally, she advocates strongly for both physical and virtual networks as key to employment.

So this is not necessarily a book that I would recommend to education colleagues.  Rather, it is one I might recommend to my grandkids in twelve years as they begin contemplating their academic journey.  However, given how much the world has changed in the past ten years, who knows what I will be recommending a decade from now!

3 thoughts on “DIYU, Probably Not, But Use DIYU Resources, Definitely!”