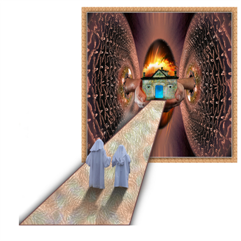 Over the past five weeks, the graduate students in my Educational Technology and School Leaders class embarked on a journey into cyberspace  – a first for many of them and one for many of them as mystical as the illustration here.  Five weeks ago, my students were self-described technophobes.  They were worried not only about taking an online class, but particularly worried about the requirement in this class to blog and, in the first four weeks, to post online a web tutorial that they individually developed to explain to their classmates how to use a Web 2.0 tool in their classrooms.

It frankly was overwhelming to most of them.

Five weeks later, all students have begun to blog.  Last week, all students successfully posted in their blogs their multimedia presentations on their web tool.  Their tutorials covered a variety of web tools that could be used instructionally, as shown on the list to the left.  You can see their tutorials aggregated in our class Google Site page.

I was pleased with the results.  As would be expected, the quality range varied, but each student showed considerable growth in their own learning.  The students primarily used Jing for their presentations, but we had a couple of Camtasia screencasts, one Youtube video and one Screenr.

This past weekend, they each reflected on their journey in their blogs.

I had to smile at one observation.  She noted that she goes to Quote Garden whenever she is stressed and needs inspiration due to feeling overwhelmed…and my course had driven her to this site more than she cared to admit!  Many of my students talked about their initial fears, anxieties, stress, and even tears, but then remarked on the joy they felt as they achieved success.  As one noted:

“…At first, I was sceptical and was of the opinion that this [class] should have been a face to face class where we are actually taken into a lab and shown how to use {these} tools.  But I will retract on that; one of my most satisfying moments was actually when I did the first recording and playback after many failed trials…”

What was most interesting was the shift in tone in their posts.  The tone had shifted from concern to elation and confidence.  As one noted, “Who knew web 2.0 tools could be so cool?”  This Wordle below is a compilation of their 13 blog posts, and I cannot find any negative words listed.  What I see are positive action words. 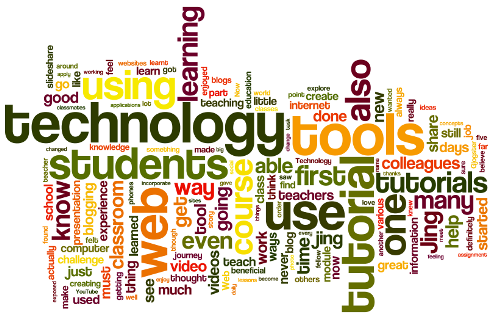 “Use” and “Using” are two words that stand out, as does the word “students”.  Several members of the class discussed how they were already incorporating some of these tools into their teaching practice.  I loved the fact that one first-grade teacher was having her 6 year olds develop Jing videos!  Others had begun to experiment with wikis, photostories, and Glogster.

Several noted that their exploration of blogs in this class had opened their eyes to the use of educational technology by other teachers.  They also had been surprised when they approached their local school technology people and found that these “experts” had never heard of Jing, Slideshare, or other web tools we were exploring.  What I liked was that they felt empowered to share their learning with these people and their fellow teachers.  More than one noted that they had approached their principal about sharing and found their principal supportive.

We had mixed reviews when it came to the question of openness on the web.  One noted that she had become “more open minded about technology and that using the web to communicate and share information doesn’t have to be a scary experience.”  Another said that she was “a little more open minded about the use of technology not only for my own personal growth but in the classroom and in sharing with my students.”  But another candidly noted that her “reluctancy is not in the use of technology but in making my page public.”

Several commented about how I had organized this online class and introduced the topic of Web 2.0.  One said that she was looking for more scaffolding of her learning from me but learned that I wanted her to explore…and she learned that she could explore and learn.  Another remarked that she had put down YouTube in the past, but never realized what a wealth of knowledge could be found there.

This course ultimately explores how schools plan for and fund technology for their schools.  It could easily be a fairly dry course about boxes and wires.  By introducing Web 2.0 as the first module, I believe that my students are in a more knowledgeable position to wrestle with the ethical, legal and political issues associated with the use of the web instructionally, and therefore better able to articulate a vision for educational technology in their schools.  To borrow from Michael Wesch, these future administrators have moved from knowledgeable about educational technology to knowledge-able.

5 thoughts on “Our Class Technology Journey”