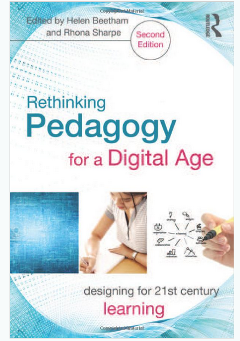 In my last post, I discussed how I was rethinking some fundamentals based on our White Paper.  “Rethinking” must be in vogue.  Yesterday, I received my copy of a new edition of a book edited by Helen Beetham and Rhona Sharpe – Rethinking Pedagogy for a Digital Age: Designing for 21st Century Learning (Routledge, 2013).

I am only a couple of chapters in so far, but I am finding it interesting.  First, all of the authors are either UK or Australian, giving a perspective that is not so USA-centric.  With England’s Open University and Australia’s unique distance program for the Outback, this perspective is worth giving a listen.  When I first started to teach online eighteen years ago, one of my mentors was Dr. Lindsay Barker, an educator from Australia.  And Lindsay was decidedly focused on pedagogy…not technology…though he was one of the first to help conceptualize using a brand new product – Lotus Notes – as a VLE.

I like the tone of this book.  The authors suggest that the theoretical concepts remain valid, but that pedagogy (which they broaden beyond youth to include adult learning) is tied to technologies of learning, and as these technologies evolve, the pedagogy should as well.  One comment that caught my eye in the Foreword was:

“…At the time of the first edition [2007], learning technologists were insisting that there was more to online learning than lectures on the web, and we should be looking to the active forms of learning that could be offered.  Since then, we have had the explosion of social media to connect learners to each other, there are more opportunities for user-generated content, and yet now there are even more lectures on the web…”

In rethinking pedagogy, the authors have attempted to use the term in the classic sense of guidance-to-learn.  They note that recent researchers have suggested that “learning” is superior to “teaching” but they make no apologies.  They note that there has always been content – whether that was the local library or the internet, but that most learning opportunities are enhanced when the learning is guided.  “Pedagogy is about guided learning, rather than leaving you to find your own way.”  So the teacher is front and center in this book.

Chapter 2 by Helen Beetham focuses on active learning in technology-rich contexts.  She noted that challenges facing online educators include recognizing the variance in learners and adapting to this variance rather than teaching to one level.  She suggests five types of learning activities appropriate for digital technologies: 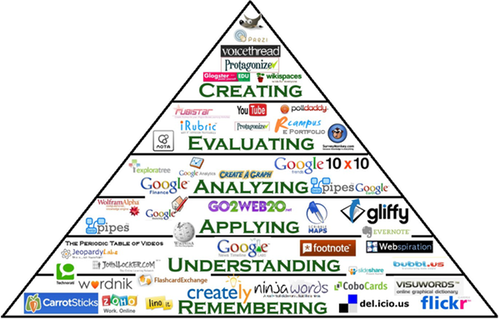 She includes a useful appendix that provides a taxonomy of digital literacy tied to Bloom’s Taxonomy.  For each level of the taxonomy, she provided examples of learning tasks with a digital literacy component, and relevant tools, applications, or services.

For instance, under Remembering, she suggested labeling diagrams, locating resources on the web and tagging them, and taking quizzes.  Tools included online whiteboards, electronic polling, and Google.

Moving up to Analyzing, she suggested activities where students identify patterns, using visualization apps or geotagging.  She also suggested the use of blogs for public debate around issues with links to evidence, as well as the use of mind-mapping software.

At the level of Creating, she suggested student generation of research projects, design of apps, or the creation of new communities of practice, using social media and web design software.  She noted that some have decried the “cut and paste mentality” of students, but she sees real value in guided tasks of aggregation, using techniques such as digital storytelling to have students make sense of their collections.  My colleague Bud Deihl would love that!

As I said, I am only two chapters in … so I have another fifteen to go.  But I am enjoying this book.  Be interested to hear from any others reading it.

One thought on “Rethinking Pedagogy”