Jane Hart has issued her call for voting for the top tools we as professionals use for learning. I have voted in the past, as I noted in 2014 (here) and 2o12 (here), and I have always enjoyed the resulting Top One Hundred Tools list that Jane curates from the votes.  Her list from last year is embedded below:

My list for this year is similar to previous years…but I found my order was different: 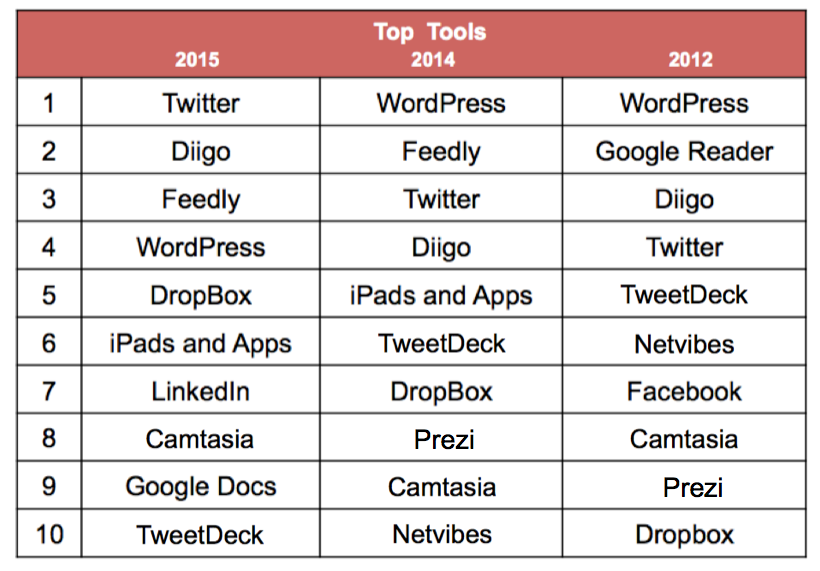 As some may have noticed, I have been blogging less as I concentrated on settling into my new job.  However, I feel the urge to reconnect, so hope to do more blogging in the future.  I continue to use the distributed network of Twitter, LinkedIn, Feedly feeds, and to a lesser degree, Facebook, as my go to sources for my personal learning network.

A related post from LinkedIn announced that they have passed one million “publishers”.  They note:

Our over 1 million unique publishers publish more than 130,000 posts a week on LinkedIn. About 45% of readers are in the upper ranks of their industries: managers, VPs, CEOs, etc. The top content-demanding industries are tech, financial services and higher education. The average post now reaches professionals in 21 industries and 9 countries.

What was not mentioned … but is no small leap to assume … is that many of these posts were made on mobile devices.  I had lunch today with colleagues from Creighton University, and they described their use of smartphones in Europe to plan on the fly and connect with colleagues worldwide.  Then one thought back 30 years ago and wondered how we got along.

A great question!  Thirty years ago, none of the tools listed above (or indeed any of the Top 100) even existed.  As the web evolved, and our tools evolved, so too did our practices.

Over the past five years, I have taught a doctoral course on technology and leadership for Creighton University in their Ed.D program.  Originally, the “textbook” was Tom Friedman’s The World is Flat.  That evolved two years later to Clay Shirky’s Here Comes Everybody, and then in the last year to David Weinberger’s Too Big To Know.  It is not that Friedman or Shirky (or now Weinberger) had lost relevance, but the web was evolving at an increasingly rapid rate.

It makes you wonder what is coming in the next thirty years…in terms of tools and in terms of practice!