Last year, I was asked to develop a new course for a new Certificate in Catholic School Leadership.  My course is the middle course in a three-course program, and the pilot group started my course this week.  Given that the course focuses on technology, communication, and school improvement, I decided to have my students blog during their 8 weeks…giving them a taste of open communication on the world wide web.  Their blog posts are aggregated here.  The eight week flow is as follows: 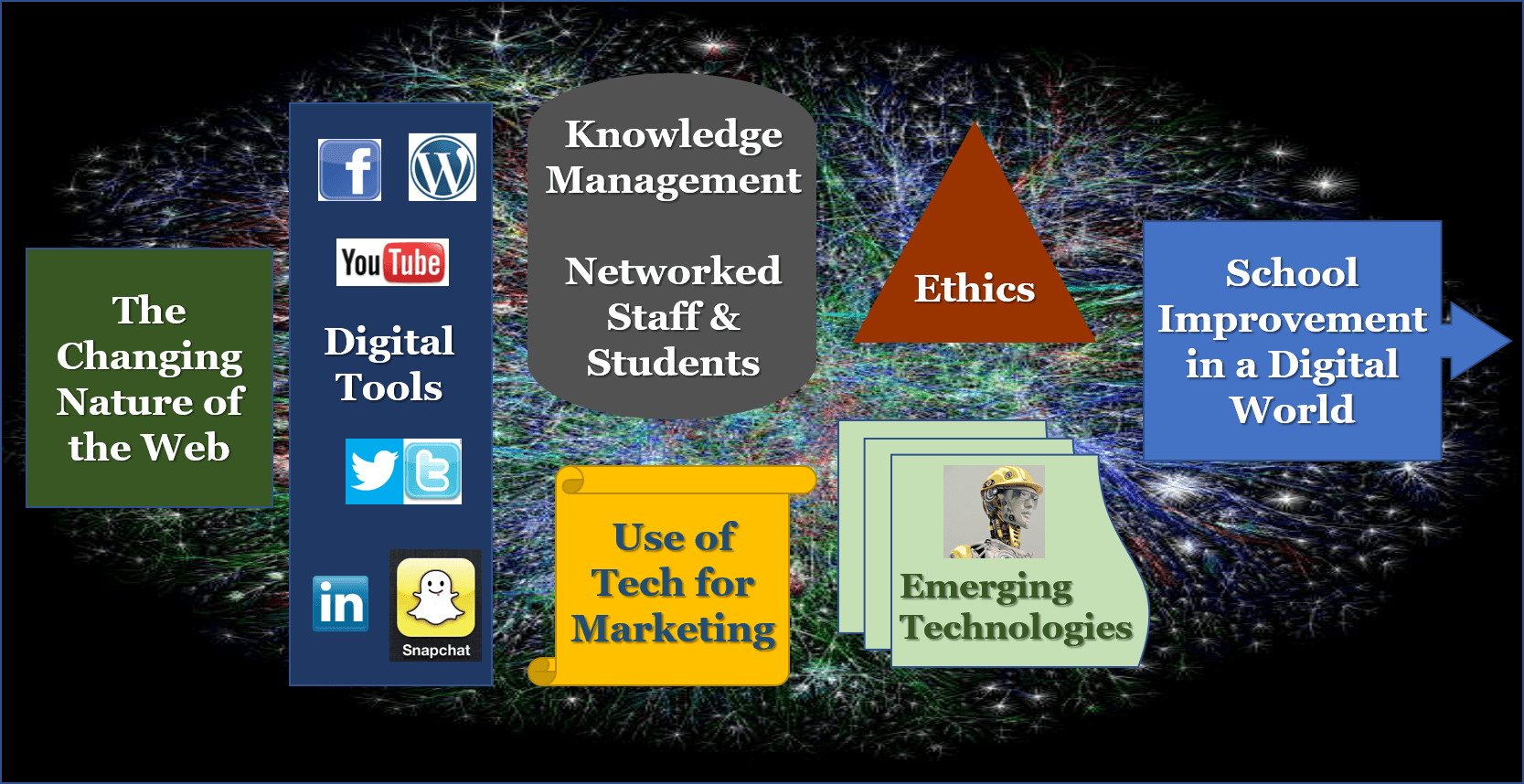 This first week, I had them read a synopsis of Friedman’s The World is Flat, a counter article from Florida called The World is Spiky, and Nick Bostrom’s TED Talk from 2015 on what happens when computers get smarter than we are.  In the coming weeks, we will be discussing the connected world of today, so I wanted to start with some baseline articles … and as my blog title hints, Tom Friedman’s 2005 book was impactful for me personally.

Since 2005, I have been the web’s Number One Fan Boy.  I have been teaching online.  I have preached the gospel of the web democratizing the world…and education.  I have adopted (and dropped) more digital tools than I care to remember.  Participating in Jane Hart’s annual digital tool survey is routine.  My definition of retirement includes teaching at three different universities simultaneously!  And I love this life style!  Earlier today I was physically Christmas shopping at Best Buy…but opting for the Amazon Prime choice instead (though my son-in-law worries about the unintended consequences of Amazon delivery trucks rushing through neighborhoods to deliver their boxes).  Sorry Chris…Best Buy did not have it in stock – I tried!  After Best Buy, it was a stop in Starbucks, and a quick reply to one of my doctoral students via iPhone.

So, I am definitely following this Henry James quote!

Yet, I have been pleased by the perspectives that have surfaced this first week in my Merrimack class.  They see the world as less flat and more spiky than I did (and over the past year, I have been coming around to their viewpoint…though I still remain optimistic…).  There were debates about spikiness or flatness within the geographic area around Lawrence…or around Boston…or in this country…or globally. Or maybe most importantly, the degree of flatness within a single class. What a powerful thought metaphor!  One noted:

“… I teach in the largest urban elementary school in the area with our academy housing over 1200 students combined; my students come from different economic, cultural, and religious backgrounds. The only real flat level field they play on is they all must be in uniform. If Friedman walked into one of our middle school classrooms he would learn, most of our students do not have access to a computer in their home. Their access to technology is limited to the time spent in the classroom using our few chrome books we are able to split between classrooms.”

“…Matter a fact, the digital divide is widening between the wealthy and the poor. The wealthy can afford the monthly internet and cable costs, while the poor can’t even afford a computer. Access to information technology is essential to participate in a technology-based global economy. The existence of a digital divide, which reflects the socioeconomic situation of users and nonusers, or the “information rich” versus the “information poor,” is of critical importance (Donnellan, 2017). I read a really interesting article, titled “NO CONNECTION: THE ISSUE OF INTERNET ON THE RESERVATION.” https://digitalcommons.law.seattleu.edu/cgi/viewcontent.cgi?article=1164&context=ailj  The author, Emily Donnellan writes of the inequalities the Native Americans face because of their socioeconomic status. Native Americans living on reservations, of which 23% live below the poverty line (Donnellan, 2017), are unable to afford the high cost of internet plans. Because of this, they are disconnected from the digital world. I learned that the costs are even higher on some reservations because of their remote locations. This seems so unjust. The thought of not “being connected” is hard for me to grasp, both personally and as an educator. It is unsettling to think in 2018, that Americans do not have internet access.”

Yet woven among the spiky comments was this comment:

“…I agree with “we live in a flatter world with spikier centers.” I am very happy to live on the seacoast of NH – 45 minutes to a major tech hub (Boston/Cambridge), 90 minutes to the mountains and 5 minutes to the beach :). Living so close to Boston, we have some amazing academic institutions (Harvard, MIT, Tufts, etc), yet I am far enough removed that these resources are available without having to live in the city.”

My students also worried about the total immersion of their students into small screens and devices, pointing out the positives of a NO iPad at lunch policy.  We spent a lot of time in the commenting discussing the “human” aspects of a digitally augmented world…and the need for balance between digital technology and human interaction.  This brought up Aoun’s book (2017) Robot-Proof and his call for integrating the humanities with technical fields to develop three new literacies – technical literacy, data literacy, and I think most importantly, human literacy.

So good posts and good comments this first week!  Give their blog posts a read and join in the conversation!  This looks to be a very interesting eight weeks!