The events of the past week, culminating in the horrific insurrection of the pro-Trump mob on the U.S. Capital, have been in my thoughts as I prepared to once again teach my Creighton doctoral course on Technology and Leadership.

To click this class off, I traditionally have students look as two classic views of the world from back in 2005 – a synopsis of Tom Friedman’s The World is Flat and Richard Florida’s counterpoint The World is Spiky. 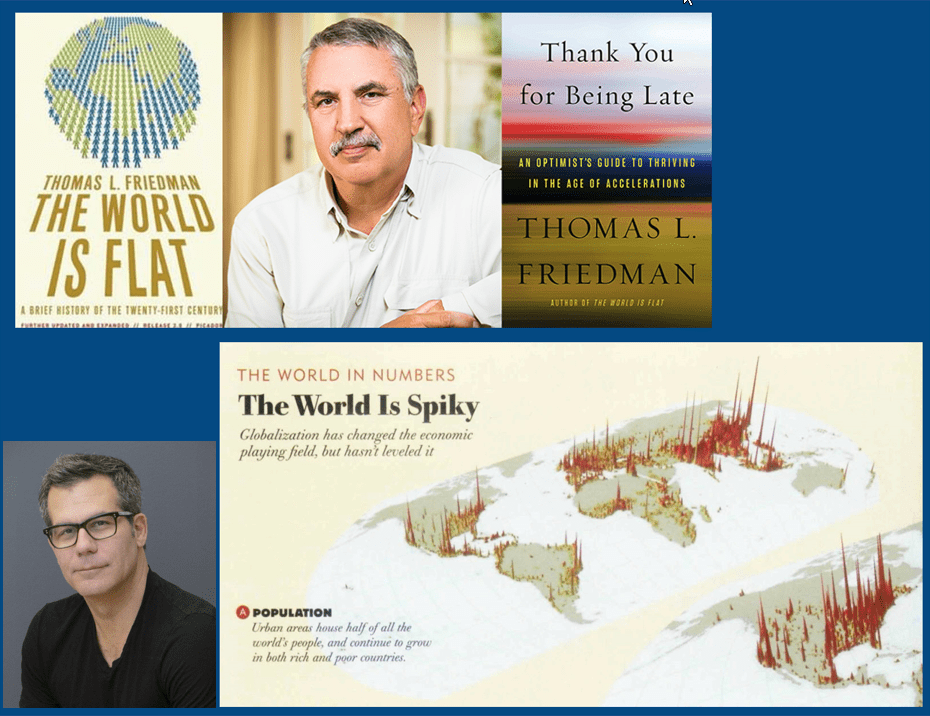 Asking doctoral students to analyze what Friedman and Florida got right and got wrong is usually a solid way to start this exploration of the intersection of technology and leadership.

But the last week has me scratching my head!

In some ways, Friedman tapped in the to optimism of 2005 – that the internet was a democratizing force for good.  And Florida voiced the “Not So Fast” pessimism that recognized how the internet was sorting people into clusters that could separate us more than bring us together.

This was academic musings in 2019 … but after the pandemic and the turmoil over the American election, culminating in a mob shutting down Congress for part of a day, this exploration of optimism and pessimism is (to me) unfolding somewhat differently.

In some ways, what I am experiencing … and what my students may experience … is trauma-informed teaching.  Kara Newhouse in a MindShift post noted that trauma can create intense feelings of unpredictability and loss of control.  She suggested more emphasis on relationships and on empowerment.

So I plan to once again run this first week exercise, but I plan to be more vigilant and mindful of the affective side of our discussions.

It may be a decade before we fully understand the leadership lessons of the past week.  Yet, I agree with Represetative Slotkin that one of the biggest leadership challenges of today is reconnecting our bipolar society. I am currently reading Barack Obama’s A Promised Land, and he discussed his 2004 Convention Speech, where he noted:

Well, I say to them tonight, there is not a liberal America and a conservative America — there is the United States of America. There is not a black America and a white America and Latino America and Asian America — there’s the United States of America. The pundits like to slice-and-dice our country into Red States and Blue States; Red States for Republicans, Blue States for Democrats. But I’ve got news for them, too: We worship an awesome God in the Blue States, and we don’t like federal agents poking around in our libraries in the Red States. We coach Little League in the Blue States, and, yes, we’ve got some gay friends in the Red States. There are patriots who opposed the war in Iraq and there are patriots who supported the war in Iraq.

I will be interested in how my doctoral students view this challenge – particularly as not all are United States citizens.  I remain an optimist, and I – like Friedman – see the potential of digital technology.  But Friedman himself in his later book Thank You For Being Late noted that time is running out, given the triple accelerations of technological change, climate change, and population growth.  Yet, like President Obama, I also yearn for a United States of America.

So I will be interested in finding out how my students see the world, given recent events!