Like many of you, I have been reading blog posts that summarized last year and looked forward to the new year.  “New Year Resolutions” are always kind of interesting, particularly since so few are kept! So I found Laura Blankenship’s post interesting, as she looked at the word “resolutions” itself – which flows from the word “resolve.”  She listed five things that she resolved to do better in 2021.

The definition of “resolve” is provided above.  Resolve is both a noun and a verb … and I like the idea of verbs – which to me imply action.  Like Laura, I had jotted down some themes for the coming year:

But what verbs go with these themes?  How do I shift the narrative to one with more forward movement?

Among my go-to lists for action verbs are those associated with Bloom’s Taxonomy.  Benjamin Bloom first developed this taxonomy in 1956, but I like the digital version created by Andrew Church.  Over the years in working with faculty to help them develop their learning objectives and associated learning activities, these six levels of learning and their associated verbs and tools across both lower order and higher order thinking skills helped faculty maintain alignment. 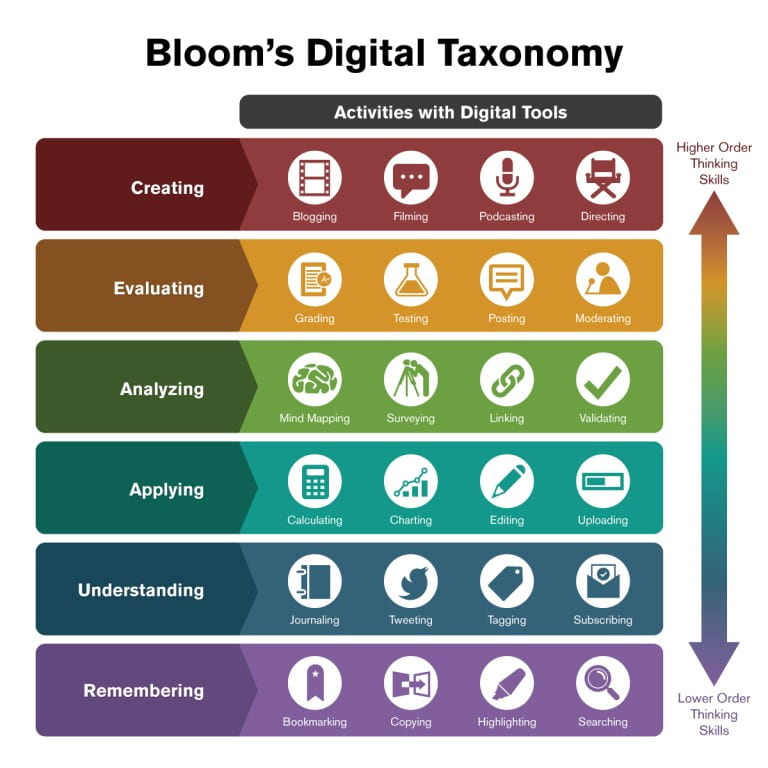 So I pulled from the action verbs some that aligned with my themes for the new year.

Adapt. Verbs that aligned with my idea of adapting better in 2021 include change, clarify, redefine, prioritize, plan, and reorganize.  The past year was beset with problems…whether one looks at the pandemic or politics!  Dan Rockwell in a recent post suggested that we need to reframe problems as opportunities.  I like that premise … and personally think we will never return to the old normal, so how we adapt to the new normal is important.  I used to suggest in my leadership classes that we move from “have to” to “get to.”  When one says, “I have to update my course,” the have-to aspect can drag one down.  Changing the verbiage to “I get to update my course” puts a spring in the mental steps!  Seeing opportunities rather than problems also puts a spring in one’s step!

Connect.  Connected learning has been my mantra for the past decade.  Blogs and tweets continue to inform my learning on a daily basis.  But I think this pandemic has reminded me of the importance of relationships over connections.

Verbs that I would associated with connecting include network, meet, detect, cultivate, and subscribe.  As this illustration by Bryan Mathers suggests, developing our networked self is part of the change in education. 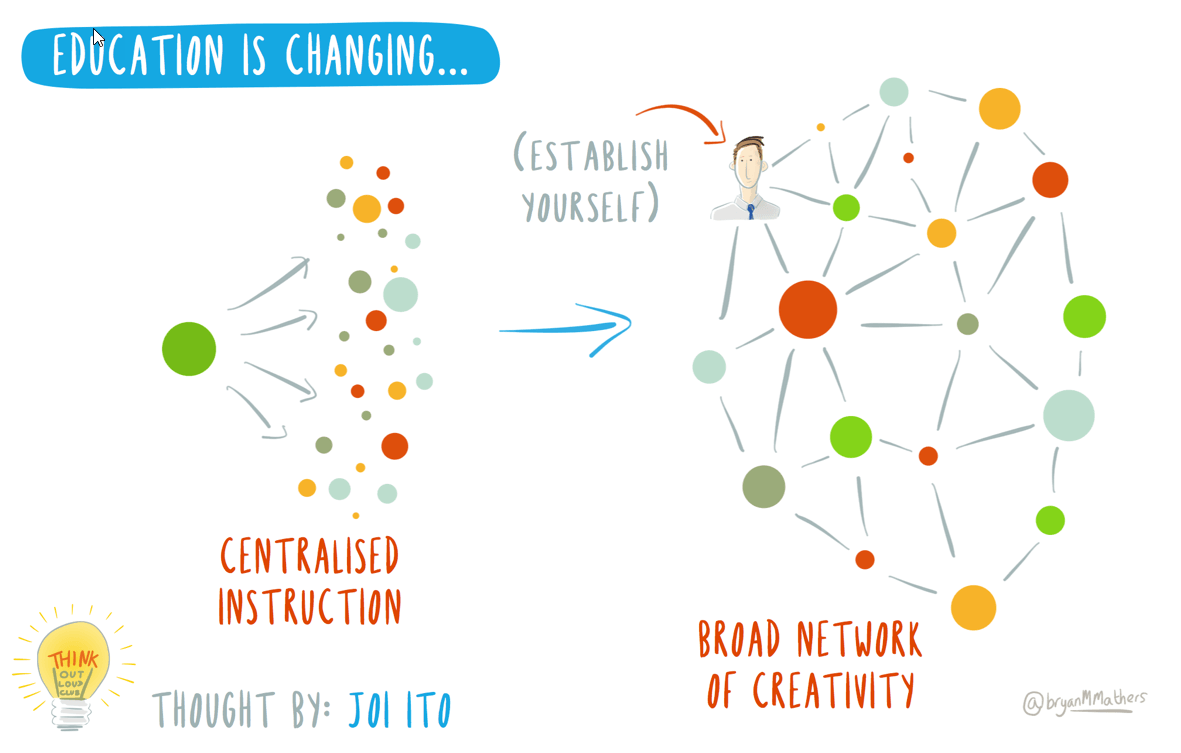 I have always made a point of building relationships with each of my students and colleagues.  The pandemic has simply reinforced this idea that we are all in this together.  In the coming year, I want to work on the aspect of social presence – both by me and by my students – such that we all do a better job connecting.

Empathize. With the past year’s very personal and real issues associated with the global pandemic – both for me and my students – it seems to me that I need to redouble my efforts to walk in other peoples’ shoes. My wife gave me Barack Obama’s new autobiography – A Promised Land – for Christmas, and I am 25% through it.  As I read, I am struck by his gift of empathy.  He faulted himself in his early years in the Senate and beginning his run for the Presidency with being too verbose and detailed oriented.  Some might say the same for me!  Yet, Obama connected with people and their stories became his story.  As an online professor, I feel that I should do the same with my students.

Verbs that I associate with empathize include characterize, assimilate, identify, associate, differentiate, infer, extrapolate, and relate.  Having retired after a decade of faculty development and moving to Virginia, but still teaching online graduate courses, in many ways my life did not change much when the pandemic struck.  I was already successfully teaching online.  Where I needed to empathize more (I think) is in the lives and academic journeys of my students.  One has to have deadlines to keep a class flowing, but one does not have to have harsh penalties associated with late work.  I recall a Gwinnett Tech teacher who told his class that he would not have any deadlines, and so he sat for 11 weeks, and then had every assignment turned in on the 12th week.  It almost killed him getting his grades in on time!  I therefore believe in deadlines … but I also recognize that life is impacting in ways I never dealt with during my younger years!

Include / Inclusive.  The social character of our nation has really been tested this past year, but in many ways, that testing was past due.  I live a dozen miles south of Richmond, VA … and during this past year, almost all monuments to the Confederacy have come down.  The one remaining – a huge monument to Robert E. Lee on Monument Avenue – has actually become a meme, and made the cover of National Geographic this month. 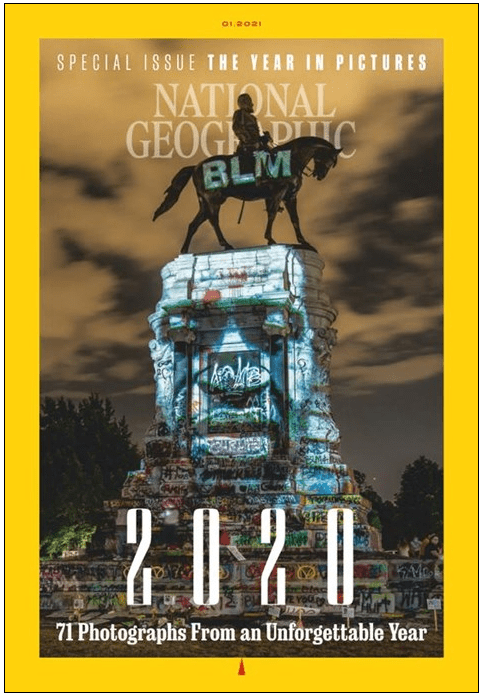 I grew up in Atlanta GA during the 1960’s, and witnessed the Civil Rights movement up close.  But I am the first to recognize that I benefited simply by being a white male.  Like the monument above, I need to redefine myself!  I spent the summer reviewing some of my assignments to add inclusive elements in the readings.  In looking at digital tech in education, it would be easy to assume that dominant aspects of the movement came from white males.  Adding readings from danah boyd, Laura Blankenship, Vicki Davis and Audrey Watters balanced some of the gender equity, but I had too few readings from Black, Latino or Asian voices.

Verbs that I associate with inclusion include analyze, reconstruct, portray, express, visualize, and illustrate.  Another important one – thinking in terms of Obama’s book, is listen.  I will work this coming year to listen and share what I learn.

Write more.  Laura noted in her post that she missed writing for pleasure.  What a great point!  During this past year, I had the opportunity to write a book chapter with two of my former doctoral students on adding social media to an online class.  It really was an exercise in writing for pleasure…as have been many of the posts in this blog.  I think one way to write more is simply to recall the pleasure associated with thinking out loud!

Some verbs that might jumpstart me include create, capture, summarize, generate, investigate, and rewrite.  I also want to think through how to capture themes graphically.  This blog is almost thirteen years old … I suspect that I could spend this year simply mining old posts and reconceptualizing them for the post-pandemic era!

That would be writing for pleasure!

As always, I would be interested in your thoughts!  What would you emphasize?  What questions should I be asking? Who should I be listening to?  What verbs would you include in your list?