My buddy Jeff Nugent passed me an interesting YouTube video Thursday night entitled “We Think.” It is an amazing four-minute journey through the possibilities of the semantic web. Shared ideas are the currency of the 21st Century.

Leadbetter talked about how innovation is vital to industry but also painful and prone to failure…and to being messy. Leadbeater illustrated the myths versus the realities of innovation: 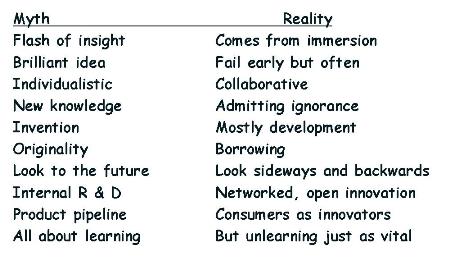 It hit me that this paralleled the principles that Sheryl Nussbaum-Beach articulated so well this week in “9 Principles for Implementation: The Big Shift.” Sheryl said:

“When we focus on the how, it prepares us for a linear, prescriptive learning experience. We determine what’s missing? What do I want my students to learn that they do not know now? Yet, what is more appropriate when preparing students for their future is to realize we do not know what the “end” is.”

That is the dilemma – we do not really know where this Web 2.0 / 3.0 / 4.0 is taking us. As Leadbeater noted, successful companies like to reinforce past success. Education is guilty of this. Senior managers’ identity comes from the past…and likewise, our tenure and promotion system is tied to the past…including past notions of “scholarship” that do not include the Read/Write web.

Managers like being in charge and assuming they have the answers, when the semantic web is all about letting go and asking outsiders to form new questions and create new knowledge. Leadbeater noted that managers hate admitting that someone else might be better, while we are members of folksonomies and twitterverses where the wisdom of the crowd is appealing. 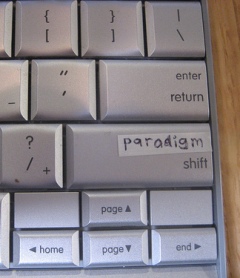 Has the new “we” changed this? I am not sure. Edgar Schein provided a past view of organizational culture and leadership. His work noted that leaders change these basic values, norms, and beliefs through socialization, charisma, and modelling desired behavior. Organizations would react to what leaders pay attention to, what leaders did, and what leaders rewarded. Leaders selected followers based on the same precepts. It appears to me that the semantic web of “we” is flipping the organization upside down, but is the culture actually changing?

We definitely live in interesting times. As Thomas Kuhn and Joel Barker noted, those in one paradigm have difficulty seeing the new paradigm. The Big Shift is a paradigm shift. Kuhn said that when paradigms shift, it is not simply a matter of members accepting a new theory but rather they must accept an entirely new world view, which carries with it massive implications. Sheryl’s principles can help move schools and universities towards this big shift, but – as with many things in the Web 2.0 world – the rules have changed once again, and the “end” is anything but clear.

One thought on “The Innovation Dilemma”