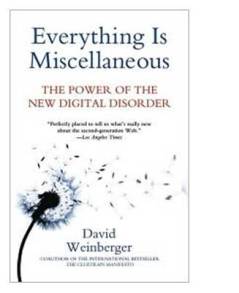 Every now and then, you are reading a book or article, and a phrase jumps out and grabs you.  It happened last night on page 198 of David Weinberger‘s delightful Everything is Miscellaneous.

“The task of knowing is no longer to see the simple.  It is to swim in the complex.”

David’s book is an interesting look at how our attempts to categorize knowledge by systems such as the Dewey Decimal System worked for books but fails in the messy interconnected web world…and that is not bad!  In essence, the web allows every person to have a customized library of knowledge built around what makes sense to that individual.

Teachers and educators are in the “knowing” business.  When I work with faculty and suggest 21st Century solutions to their problems, I am generally met with resistance.  It is easy to understand why.   With the exception of a few early adopters, faculty generally have an established concept of how to do research.  They correctly note that they gained their success and became tenured professors through a time-honored process that did not involve the web.  Social networking has not been part of that process.

Tomorrow, Jeff Nugent and I will be working with operational research faculty at the INFORMS Teaching Effectiveness Colloquium. We are going to discuss what the research suggests about how people learn, how students have incorporated the web into their lives, and how technology can transform teaching and learning. We have a full day with them, so it should be interesting.  I am looking forward to seeing how open they are to ideas of messiness in teaching and learning!

Two nights ago, Jeff was a member of a panel discussing the Millennial Generation to Mass Communications students and faculty. One panel member stated that FaceBook did not have a place in education. Jeff countered that social networking was vital to education today. He noted how Twitter was typically the first means by which he learned of breaking news, and tried to describe how following in Twitter was akin to friending in FaceBook. He realized that the older members listening to him had no idea what he was describing. They did not get it.

I am starting to realize that one reason I do get it is that I swim in the complex every day. My normal routine every morning  and routinely during the day (7 days a week) is to first check emails, then Twitter, and then Google Reader, where I subscribe to over fifty blogs, a dozen news feeds, and some that are difficult to classify but definitely form part of my personal learning environment. I now assume that I will be part of a backchannel conversation in any meeting or conference I attend. This did not happen overnight, but it did happen in less than two years, and I now cannot conceive of returning to the old “manual” way of learning and knowing. It certainly is not simple, but it is right in line with David Weinberger’s reasoning.

Back in June, I used the stream analogy to reflect my emersion into Web 2.0.  It still fits, which is why David’s words resonated so powerfully with me. So, my advice to my colleagues is simple – the longer you try to keep your life simple and organized, the less you will know and the less you will be relevant.

Strong words or on target? Be interested in your thought!

3 thoughts on “Swimming in the Complex”