The mind naturally looks for connections and patterns when involved in multiple tasks, and as I am currently teaching both EDU 6323 – Technology as a Medium for Learning – for Northeastern University and ILD 831 – Technology and Leadership – for Creighton University, there are common points.  One of those is the idea that networks are changing everything.

In ILD 831 this week, I introduce a quote from a 2014 Gartner News Analysis on successful digital businesses:

Friedman in The World Is Flat suggested that work has become global – no matter the size of your company – and the shift of competition has moved from down the street to the opposite side of the globe.  Weinberger in Too Big To Know continued this concept of expertise within the cloud rather than within an organization.

Westerman, Bonnett, and McAfee in Leading Digital (2014) noted that the web has allowed previous paradoxes to become exploitable: 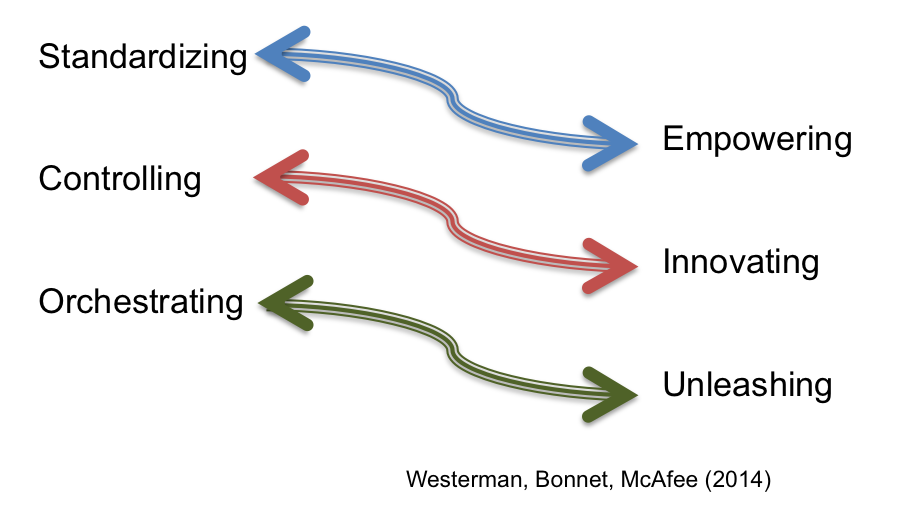 This sounds pretty rosy, but there are dark sides to this changing nature.  Ford in Rise of the Robots suggested that automation will increasingly eliminate both blue collar and white collar jobs, with no alternative work being created as happened in the past.  If all occupations continue to streamline due to technological advances, we may reach a point where there are no jobs for our college graduates or displaced workers – and no paid citizens to buy goods and services.  One of the readings this week has Bill Gates discussing the dangers of artificial intelligence.  And Harold Jarche posted in Medium that “The job was the way we redistributed wealth” but that will soon come to an end.

All of this suggests that the nature of work is changing – in good ways and potentially not so good ways.  Networks (both to people and to things) are a part of this change.  The same could be said about the world of education.

In EDU 6323 this week, after 9 weeks of exploring digital tools, I asked students to explore the concept of a Personal Learning Network.  One of the readings by Kay Oddone used Alec Couros‘s now classic illustration: 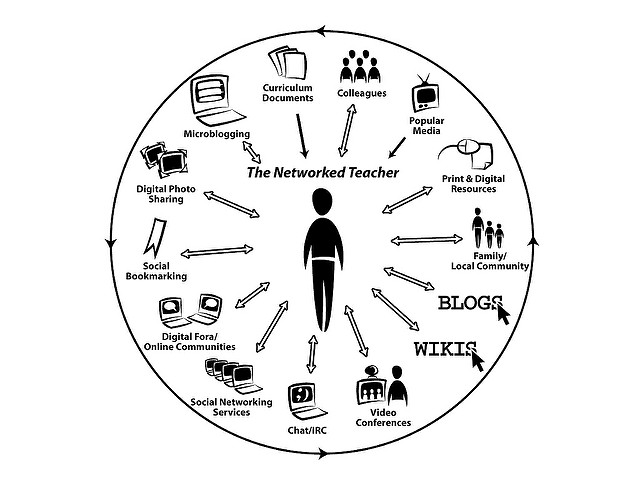 One of my students noted in discussions that after seeing this image, the whole course suddenly made sense!

My prompt for this week’s discussions noted that my colleague, Jeff Nugent, Academic Technology Director at Colgate University, once told me that the first reaction when faculty and staff are introduced to new technology is “rejection”, followed by “curiosity”, “exploration”, and potentially in the end, “adoption.” One way to more rapidly move from rejection to adoption is through trusted relationships. I asked the students, based on readings of Minds Online, as well as the collection of readings this past term and this week, to discuss their personal take on a “personal – learning – network”? Is this already a concept they use? If not, can teachers help students develop one without developing one themselves?

All responded positively to both creating a PLN and in using it in their teaching.  One noted that “Your PLN is a commitment.”  Several equated our class use of Twitter and the hashtag #edu6323 as the beginning piece of a PLN, noting that they had made connections in Twitter … and started following people … that they would not have otherwise.  One noted the frustration with the pace of decision making in education, and how a PLN provided a more flexible and nimble process for learning about change.  Another noted how Twitter had exposed her to others who had the same self-doubts she did.

“…Sometimes you don’t need to take specific action to improve as an educator; sometimes, you just need to know others have similar experiences. I am sure we have all had days that made us doubt our competency, and a strong PLN can combat that, increasing our fortitude.”

I loved this discussion statement by another student:

“I do not feel that we can help students develop a PLN without developing one ourselves mostly because as we monitor them, subscribe to them to make sure they are doing as instructed, create wikis, blogs, curriculum documents, etc….we have become (if only temporarily) part of their PLN defined by Oddone (2015)  as “a community of like-minded individuals who might never meet in person, but which challenge, push, share, teach and support each other”. We might begin our journey by having the typical teacher network but ideally we will work into being that networked teacher (supported by our global network) designing courses like Miller that can “put it all together”, can present ideas and opportunities for assignments, assessments, encourage peer to peer interaction and collaboration all while promoting deep meaningful processing and learning.”

And finally, this wonderful statement:

“…Jeff Nugent could not have described my own experience anymore accurately than had he known me personally going into this course.  I contemplated very deeply if this was a course I would enjoy or even be successful in.  It’s not that I have an aberation to technology, not really, it’s just that generally it frightened me I suppose, causing me to reject it as extra & confusing, nonessential fluff. I even approached one of my colleagues who is very tech savvy and got him to promise he would be a lifeline for me should I sink (which I was most certain I would). But the first assignment was indeed enlightening and sparked a curiosity, just as Nugent predicts…I think learning to develop my own learning network can help me assist my students in creating their own. I’m not going to say that I felt like the sole resource that my students should rely on for knowledge, but I can say that I was a bit against random use of sources such as Google. I felt that students would disengage in class and stop listening with the plan to go home and learn it at home from my Bb resources and Google.  So it annoyed me a bit..My philosophy was “I’m the one that makes the test, therefore, I’m the one you should get clarification from.” And I suppose that still applies to some minor degree, but I have completely changed my teaching philosophy and welcome the collaboration of knowledge that students can bring to the classroom.  I can’t search, analyze, and utilize every available source, but together, we can all contribute something and learn from each other and make each other stronger, including the old dog in me.”

It is nice to see these teachers fundamentally rethinking their teaching based on networked learning.  Now I need to go check out the blogs from ILD 831 to see thoughts about networked leaders!

One thought on “The Networked Age”