Audrey Watters this week posted a talk she gave at Coventry University earlier this year entitled “The Top Ed-Tech Trends (Aren’t ‘Tech’).”  Good talk by someone I like to follow in my feeds…primarily because she is the contrary voice I sometimes need to hear.  Now I am trying to balance the optimism of Friedman (and me) with the pragmatism of Audrey. 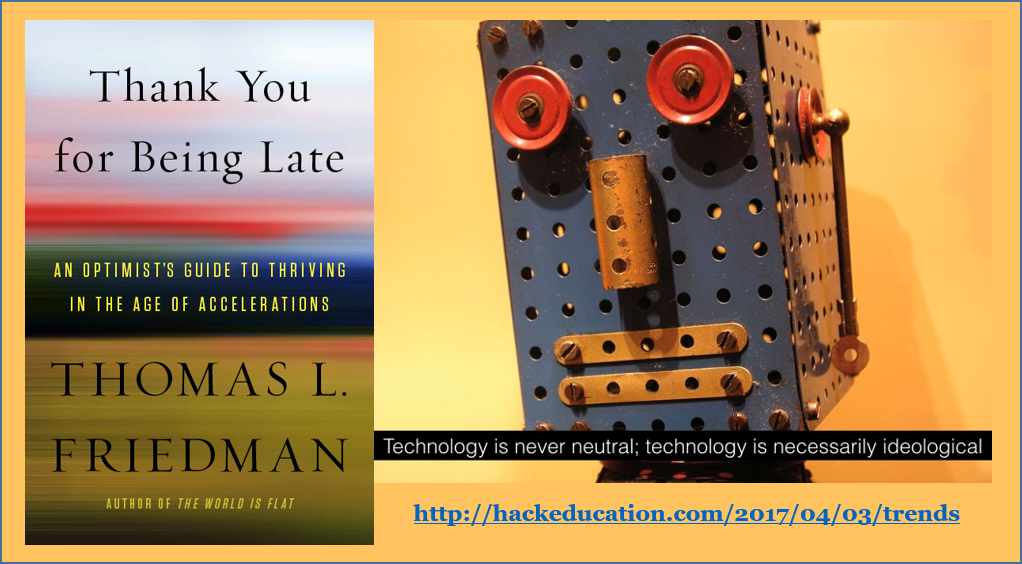 Since 2010, Audrey has published a series of articles covering the trends of the past year in educational technology – a huge undertaking!  She summarized her flow of trends in her talk.

Audrey offers her yearly well-researched articles as a counter to the short bulletted list of “must have new cool” technologies that seem to roll out every December and January.  As her list illustrates, her trends are more ideological than technological…which in some ways aligns with Tom Friedman’s mega-trends of simultaneous accelerations of technological change, market change, and climate change.  In both cases, as Audrey noted so well:

…and as she noted, they are US-centric and even California-centric.  She discussed the narrative flowing out of Silicon Valley…the “dream factory” of California.  This narrative supports an optimism for science as the solution for all the world’s problems.  The focus on skills, personalization, learning to code, disruption … all flow from the California Ideology as described by Watters.  Audrey noted that she chose “the platforming of education” in 2012…and wondered if 2016 saw the failure to platform emerge as a theme.  An interesting observation, as I recall the 2012 optimism associated with A Domain of One’s Own and personalized platforms as the vehicle to lifelong learning.

In many ways, Friedman shared this optimism when he noted that we had entered a world in which”…connectivity was fast, free, easy for you and ubiquitous and handling complexity became fast, free, easy for you and invisible.”  Any problem could now be solved through the combination of fast, free connectivity and fast, free crunching of data in the cloud.  And that is probably true for technological problems.  Within the agriculture economy, the decline in immigrant field workers will probably be solved with automated field workers.  Friedman noted that we have reached an age where you only have to dream about a solution and you can achieve it.  You can build the platform to make it happen.  But Audrey closed her talk by noting that platforms are not substitutes for communities.

Both Friedman in Thank You For Being Late and Kevin Kelly in The Inevitable make an optimistic case that as technology displaces workers, it also creates new jobs requiring new skills. But Friedman also noted that when the Industrial Age displaced the Agricultural Age, it took about a generation for old ways to die off and new ways to surface.  While the rate of change has accelerated since 2007, will our rate of adaptation – both as individuals and as educational systems – match that change rate?  Audrey quoted Neil Selwyn, who identified three contemporary ideologies intertwined with the technological ones – libertarianism, neoliberalism, adnd the ideology of the new economy…to which she added a fourth – technological solutionism.  These four align with concepts of venture capitalism, the gig economy, the shared economy, the attention economy…all happening fast, free, easy for you, and accelerating.

To riff off of the video below, have we become so enamored with personalization that we have lost sight of the person?  One of my students shared this video by Prince Ea with the class…and it is worth a listen.

It is another way of saying…balance optimism with pragmatism…